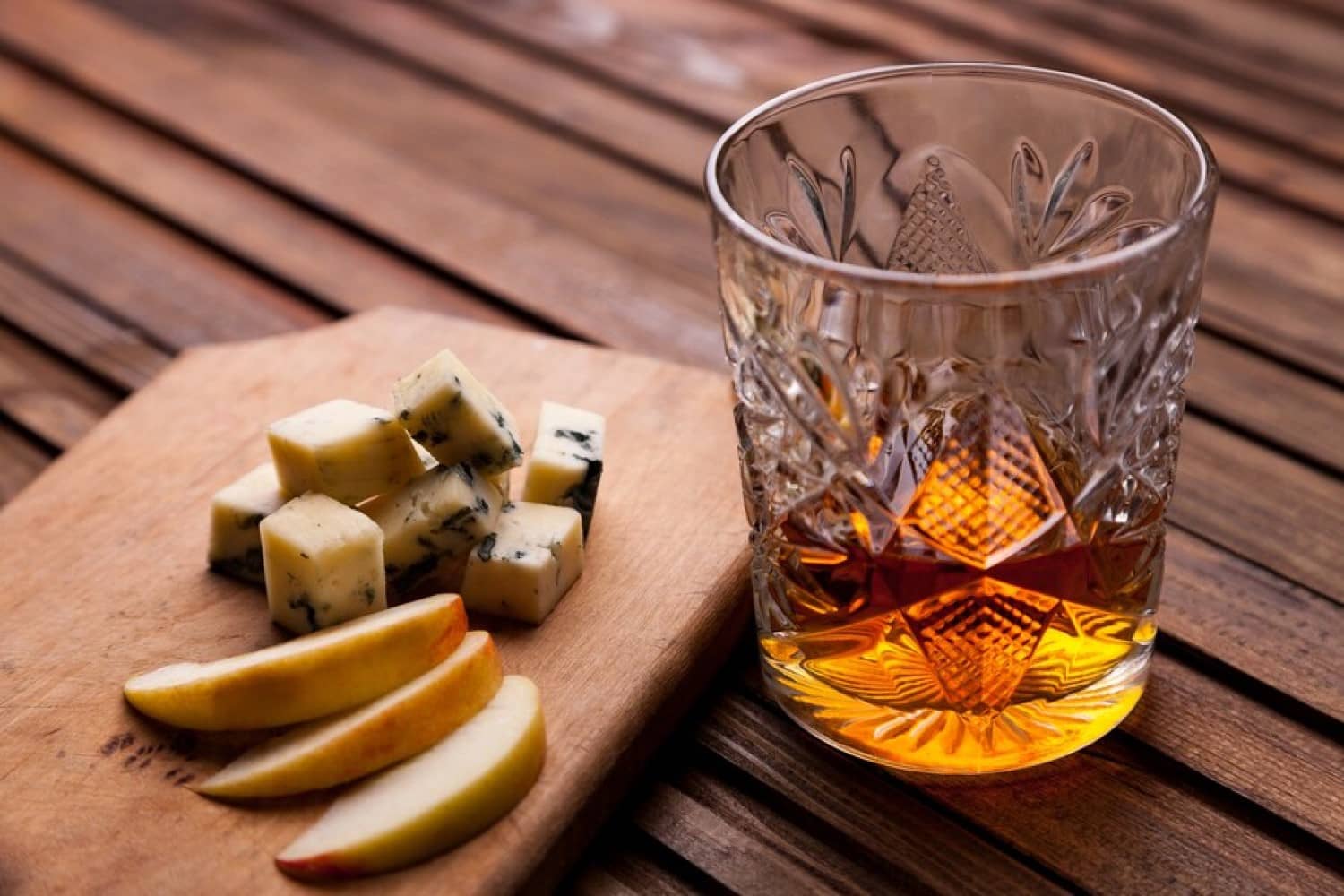 While other alcoholic beverages such as beer and wine have a long historical association with mealtime, the idea of enjoying whisky with food is often met with skepticism, if not outright derision. That kind of snobbery is short-sighted, because, with the right pairing, the experience can be sublime.

While the use of whisky in recipes is already a common practice, here we will focus on some of the best snacks with whisky. This is a great way to learn which flavor pairings match your palate.

If you have never paired your favorite whisky with food before, this will help you unlock hidden notes and nuances that you’ve never noticed before. This quick guide to the best snacks to pair with whisky makes suggestions that are equally appropriate whether you are dining alone or hosting an intimate whisky tasting party for a few lucky friends. We hope it inspires you to leave your comfort zone and boldly try new combinations.

Table of Contents – Sip this article 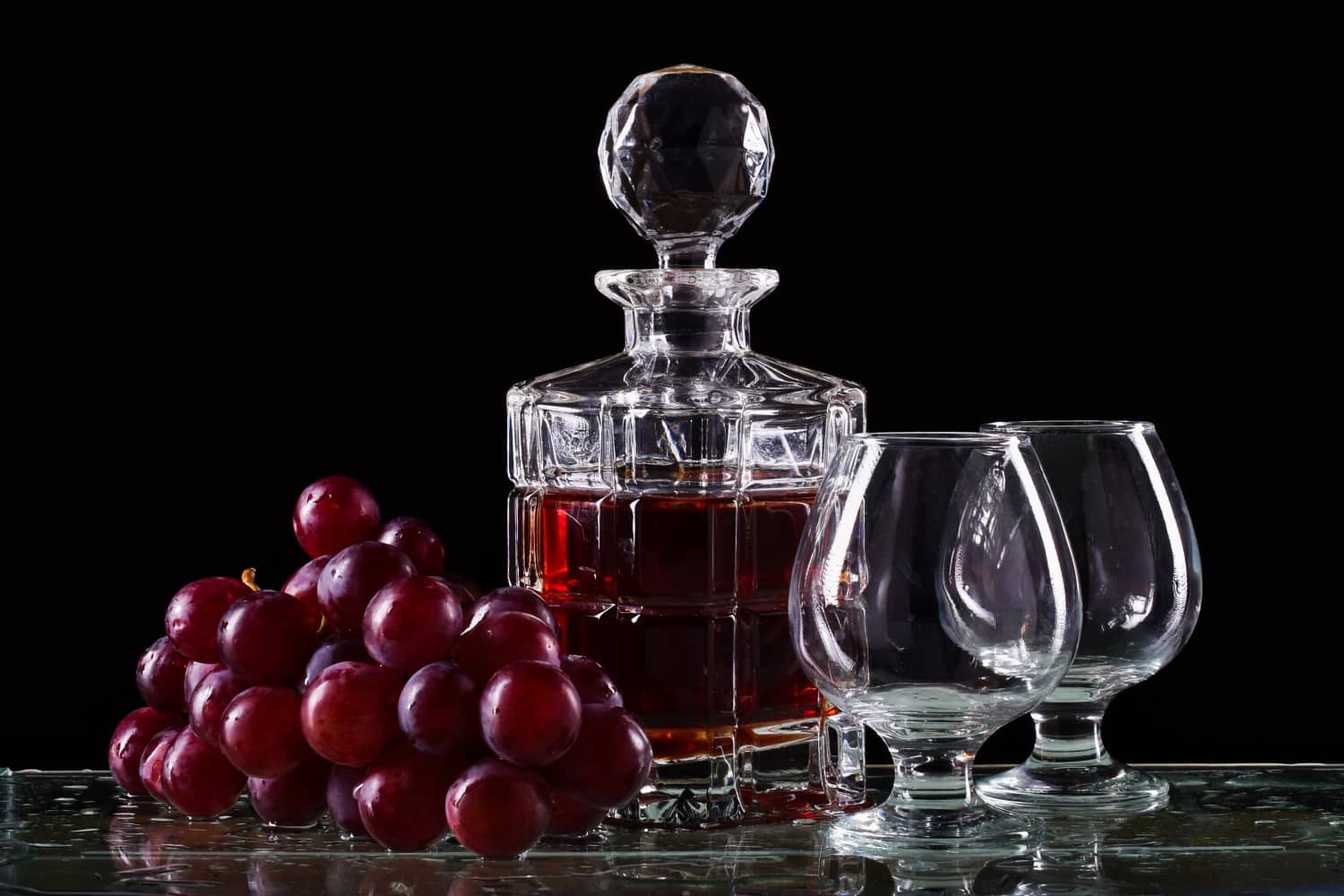 The Best Snacks to Pair with Whisky

Getting things straight, it’s important to note that you don’t drink fine whisky to become intoxicated. Great whisky is a sensory experience that is to be savored – the beautiful brown color, the aroma, the complex taste, the velvety feel of it in your mouth, and even the sound it makes when you pour yourself a glass.

The right snacks help you maximize your whisky experience in two ways.

First, drinking on an empty stomach dulls your senses. You cannot enjoy the full experience if you are intoxicated. Snacks keep you from feeling the whisky’s effects too fast.

Second, the best snacks to pair with whisky will bring out subtle notes in your dram and enhance its flavor. You notice elements that you never did before. Even your long-time favorite whisky becomes new again as you discover hidden nuances.

In other words, your whisky experience just gets better.

Want to know the proper way to taste whisky? Check out this article: https://www.whiskyflavour.com/blog/3-different-ways-of-tasting-whisky/

What are the Best Snacks to Serve With Whisky?

“When you complement, the flavors of the (whisky) and the food melt into each other. This experience gives you the feeling that you have just tasted the perfect match, and you cannot tell where one ends and the other begins.”

“When you contrast, you bring out nuanced flavors in the (whisky) or food to create a new or unexpected flavor. It creates a feeling of discovery and excitement.” ~ Anne Pettry, Chef, Decca Restaurant, Louisville, Kentucky

At a whisky tasting party, you want the best snacks to pair with whisky and can join them in three kinds:

First, you want something neutral to cleanse the palate between samples. Any snack cracker that is crunchy, salty, and has a mild flavor will do just fine:

Second, dried fruit is de rigueur when serving a fine bourbon. The whiskey blooms differently when combined with the concentrated sugars found in the dried fruits.

Third, you need a good-quality charcuterie board with a nice selection of fine meats and cheeses. Similar to the way wine is paired with cheese and tapas with sherry, the right combination of top-shelf whisky and gourmet charcuterie can elevate the flavors of each element. The sum will definitely be greater than the parts.

This isn’t your typical cheese-and-crackers tray. To do your whisky justice, you want to lay out equally-fine specialty meats and gourmet cheeses.

Examples of meats and cheeses that can accompany any whisk(e)y include: 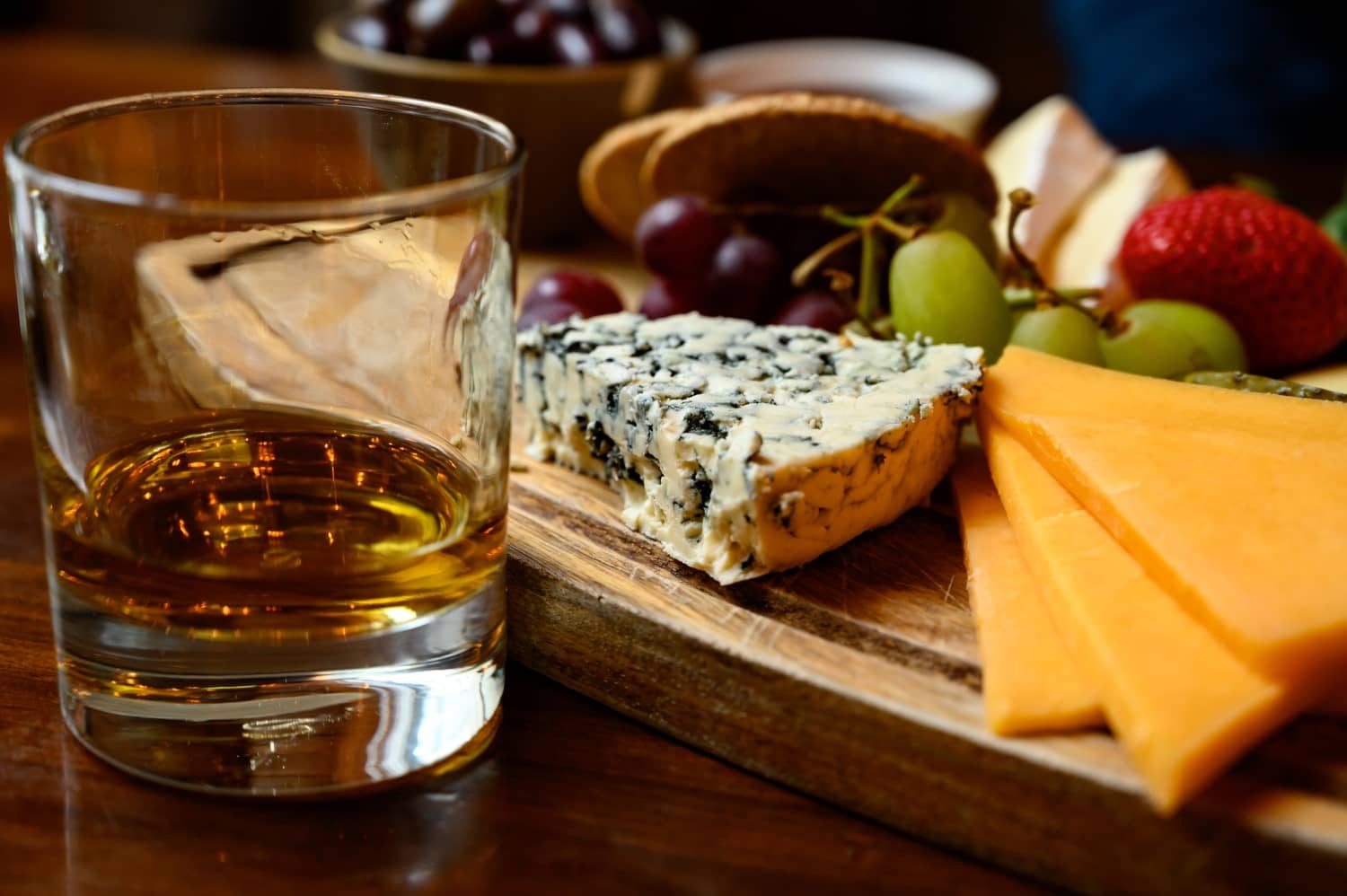 Pairing Snacks to Each Type of Whisky

Because the best whiskies are closely associated with specific parts of the world, one fun idea is to incorporate foods from the same regions among the snack options. This idea lends itself to some intriguing and unusual possibilities.

While you may have to order from specialty shops to find some of these foods, the payoff is an unforgettable tasting session with the best snacks to pair with whisky.

Best Snacks To Pair with Bourbon

As the Bourbon capital of the world, Kentucky has a lot of native foods that pair extremely well with the Commonwealth’s signature spirit. Here’s a short list of best snacks with whiskey.

Bourbon Whiskey is made primarily in Kentucky from 51% corn mash. This barrel-aged bourbon has a sweeter taste than whiskies made from other types of grain. Bourbon tends to have a complex flavor profile, with notes of oak, honey, maple syrup, vanilla, and spices.

Tennessee is closely associated with traditional southern cuisine, of which many dishes are an excellent accompaniment for sweet Tennessee whiskey. Because they are both spirits in the South, you could pair the same snacks that you did with bourbon. But, regarding what snack goes well with whiskey from the Tennessee, it would be the ones that originate in Tennessee. 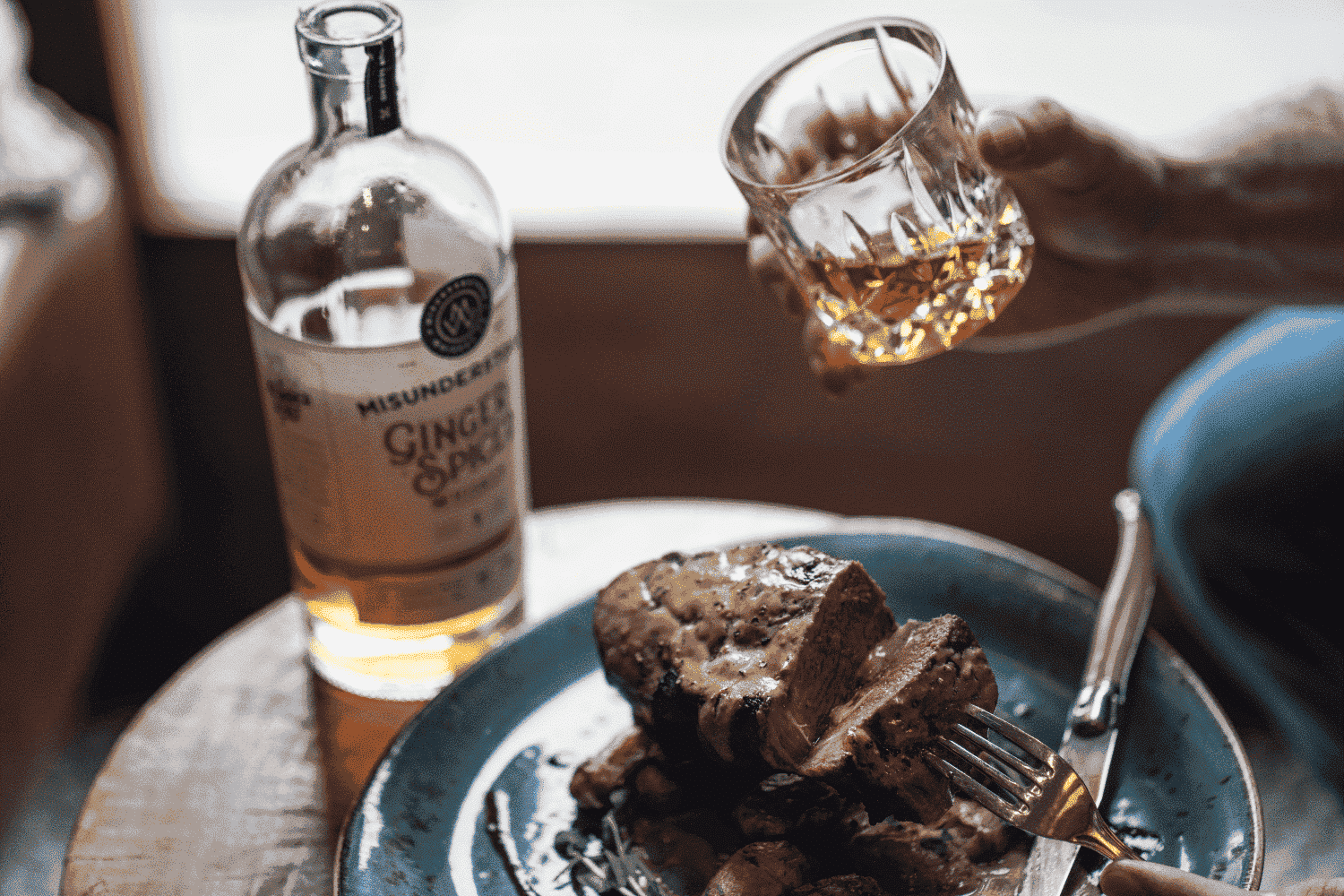 Due to its triple-distillation process, the biggest characteristic of Irish whiskey is its smooth and sweet flavor, but the complete flavor profile describes it as light, fruity, and possessing a unique hint of cereal grain.

Irish whiskey must be aged in wooden barrels for at least 3 years, and this aging process adds the distinctive flavors of oak and caramel.

Ireland’s cuisine is much more than potatoes and cabbage. Many Irish foods should be tried while enjoying smooth Irish whisky,

This is also an opportunity to present together two of Ireland’s most-famous products – whiskey and cheese. Ireland has a well-deserved reputation as a producer of delicious farmhouse cheeses, many of which are the perfect partner for smooth Irish whiskey.

Want to know some great Irish Whiskey expressions? Here’s the guide you’ve been looking for: https://www.whiskyflavour.com/blog/the-best-irish-whiskey-you-can-buy/

Traditional Scotch whisky uses malted barley that has been dried with peat smoke. Because peat is made from decayed vegetable matter from acidic fens and bogs, each region of Scotland has its own signature whisky. Peated Scotch has undertones of smoke, ash, malt, mild sweetness, and oak.

The smoky, peaty flavor that some Scotch Whisky have is well-complemented by traditional native foods. Scottish food relies more on simple ingredients rather than spices that could overpower the whisky.

If you are going to lay out a spread of Scottish foods that go well with Scotch, you cannot forget to include haggis, the National Dish of Scotland. In fact, it’s considered traditional to have a wee dram alongside your haggis. The combination really works – the oatmeal in the haggis brings out malty notes in the Scotch, and the smoky flavor of the whisky adds complexity to the haggis and offsets its gaminess.

Canadian whisky is a corn-based whisky with added rye grain. It also is known for being light, smooth, and spicy. Other aromas and flavors include wood, vanilla, walnut, and a distinct nuttiness.

Canada has a rich culinary history influenced by Native American and European menus, with an immense agricultural and livestock larder. Canadian whisky is light and smooth. The best snacks to pair with whisky from Canada are among:

Canada is also one of the most important cheese-producing counties in the world. There are over 100 varieties available. While a soft brie would complement a fine Canadian whisky nicely, good contrasts are found with a sharp Canadian cheddar or a pungent Dragon’s Breath Blue.

Want a suggestion of Canadian Whisky? Black Velvet is an expression to taste, for sure!

Purposefully made to mimic the flavor of Scotch, Japanese whisky shares its flavor profile. There is, however, a perceptible difference due to the water sources. When aged in Mizurana casks made from Mongolian Oak instead of white oak used in Scotch, Japanese whisky takes on subtle hints of coconut, flowers, honey, vanilla, and spices.

Here’s the best snacks to pair with whisky from Japan:

Cheese is not a traditional food or native to Japan, but pickled dishes can serve the same purpose by adding tanginess that matches the smokiness of the whisky.

The Bottom Line About Snacks with Whisky

The best snacks to pair with whisky either complement each other, bringing out previously-undetected nuances or contrast each other, highlighting individual taste elements. The pairing is supposed to further engage the senses and make the entire experience more enjoyable.

The biggest takeaway from all of this is the importance of having a sense of adventure when experimenting with whisky and snack combinations. Discovery is half the enjoyment, and as you continue to educate your palate, you will enjoy new pairings even more.

It is no longer taboo to pair food with whisky. The possibilities are limited only by your own imagination and creativity. There are enough whisky-making regions and enough varieties to make for a long and fascinating journey.

One exciting thing about experimenting with whisky and snacks is how as you go along, it will reveal the differences between different labels, varieties, and even regions. Your experience with one whisky and one snack won’t be universal, and it will be a rewarding education.

But it has to start with a top-shelf luxury whisky. You build the pairing based on the potential found inside the bottle, and you refine your choices after every tasting event.