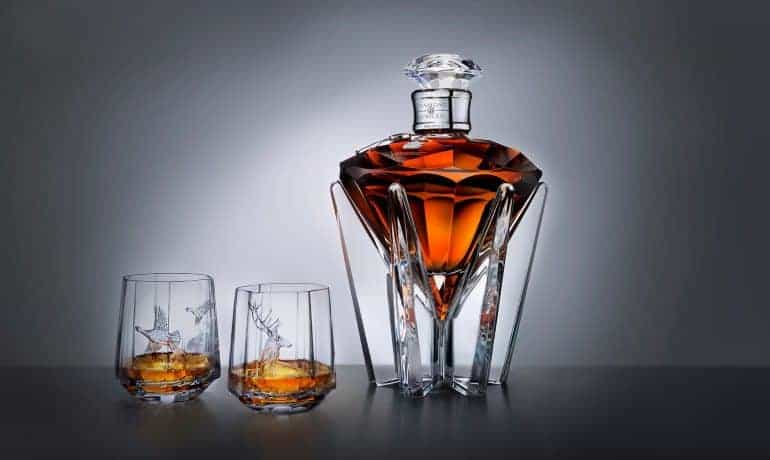 Whiskey is a strong brand that fetches some of the highest prices. Moreover; whiskey is one of the most popular lines of alcoholic brands that are sold, loved and consumed worldwide.

The prices tagged to these brands are pegged on the age, unique taste and rarity.

To know which takes the spot of the highest expensive whiskey, you have to look at our list and decide (based on your reason to get one) which bottle is best placed to help you mark that special occasion!

The Balvenie Scotch whiskey is produced in Scotland in an area known as Speyside. It was produced using old age handcrafting methods, and only 88 whiskey bottles were made.

Today, the collection fetches upwards of $50,000, and it’s quite rare, and only connoisseur whiskey lovers boast of having a bottle in their collection.

The whiskey is a few years shy of hitting a hundred years old and is considered as a worthy bottle by whiskey lovers. 2007 will go down as the year Christie’s auction house sold the most expensive whiskey brand a Macallan whiskey bottle for $54,000.

The Glenfiddich Whiskey Janet Sheed Roberts is a Reserve bottle has been maturing since The first day of 1955.

The bottle is in the honour of Janet Sheed Roberts, granddaughter of the Glenfiddich founder (Willian Grant) who passed on at the after she reached 110 years.

The distiller made 15 bottles in her name using the half-century-old barrel. 11 bottles were put up in auction and one fetched $94,000. The whiskey is accredited for its floral, fruity and sweet taste.

The remaining four bottles were given to the family to pass along as heirlooms.

The whiskey was auctioned in 2006 in an auction for $100,000. It became the first most expensive whiskey brand produced in America and was bought by a publisher known as Marvin Shanken.

The Glenfiddich 1937 whiskey remains as one of the rarest alcoholic bottles. It was blended in aged oak casts brought from Cuba, and only 61 bottles were produced.

Six bottles are remaining in the world, and one of them is on sale in Hong Kong (At the Chep Lap Kok Airport) and is selling at $120,000. Collectively, the six remaining bottles make this the world’s oldest bottles of single malt whiskey.

Trinitas is the name given to the Dalmore whiskey, which is one of the three bottles that were made. The bottles are made up of combined spirits that were distilled in 1868, 1878, 1926, and 1939.

The Dalmore 64 Trinitas bottle was sold for $160,000, making it the first scotch whiskey to sell for six figures.

A rare whiskey that fetched 85,000 bought by an anonymous English businessman. He preserved it, and now the bottle is up for sale again for $250,000, making it one of the rarest and expensive whiskey brand.

Another rare Macallan that belongs to the Lalique crystal decanter line. The collectable scotch whiskey bottle sold for 460,000 in 2010 in an auction at Sotheby’s New York.

The Macallan hand-blown decanter is one of the reasons why this whiskey bottle fetched $628,205 in Hong Kong. The bottle was crafted for 50 hours by 17 craftsmen. The bottle is also one of the four Constantine bottles remaining today.

The whiskey was selected from casks that range in age, starting from 25 years to 75 years. The “M” in this Macallan bottle is attributed to the many barrels.

The bottle for this whisky is the reason why it fetches a staggering $6.2 million. The whiskey bottle is encrusted with white gold, 8,500 diamonds, and 300 rubies. It remains as the worlds most expensive whiskey brand.