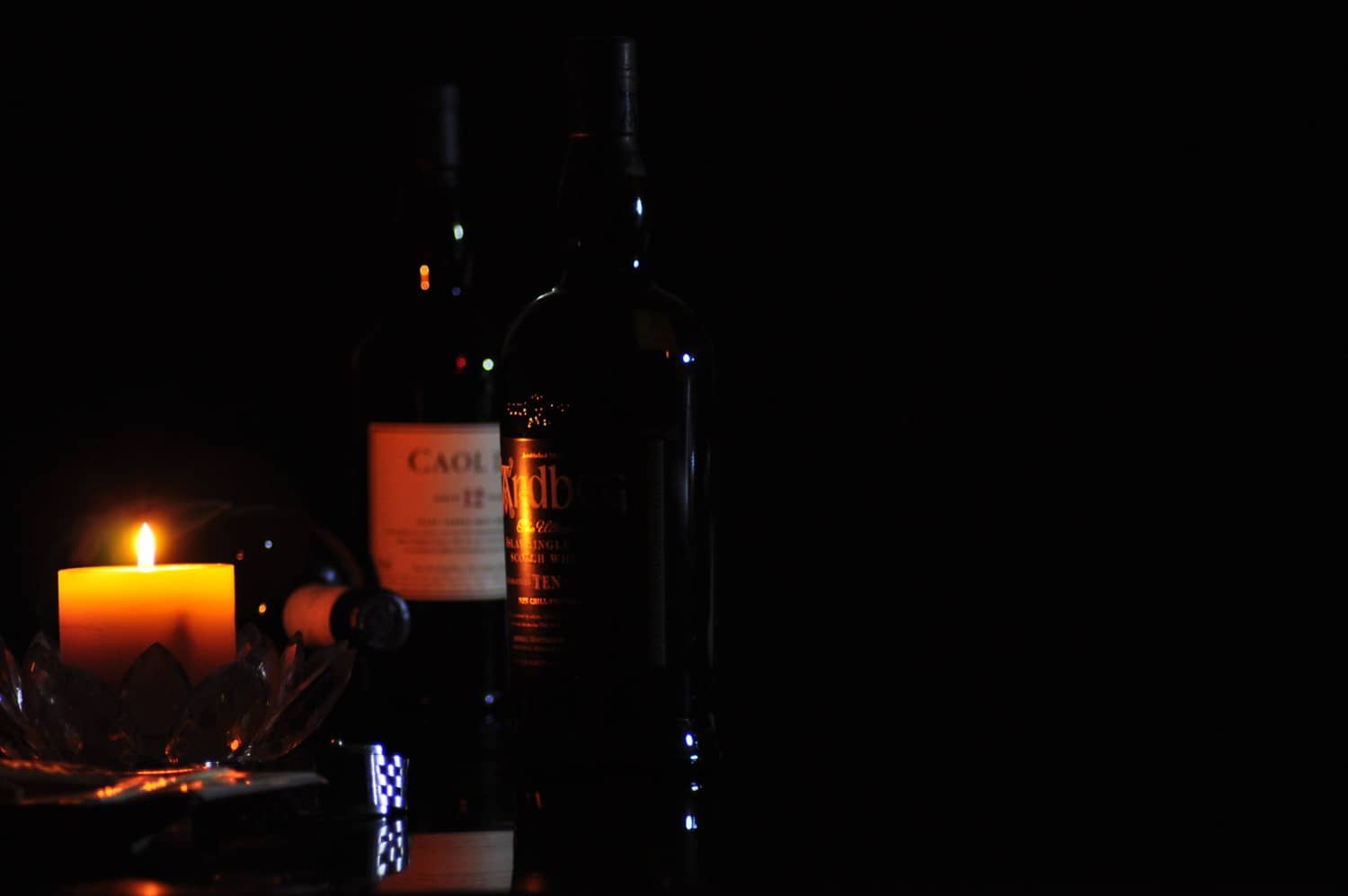 From light to heavily peated scotch, smoky whisky is becoming more and more highlighted on the market. Here’s a guide that will tell you how whisky gets smoked and a list of the best peaty scotch whisky brand that you, definitly, should taste. 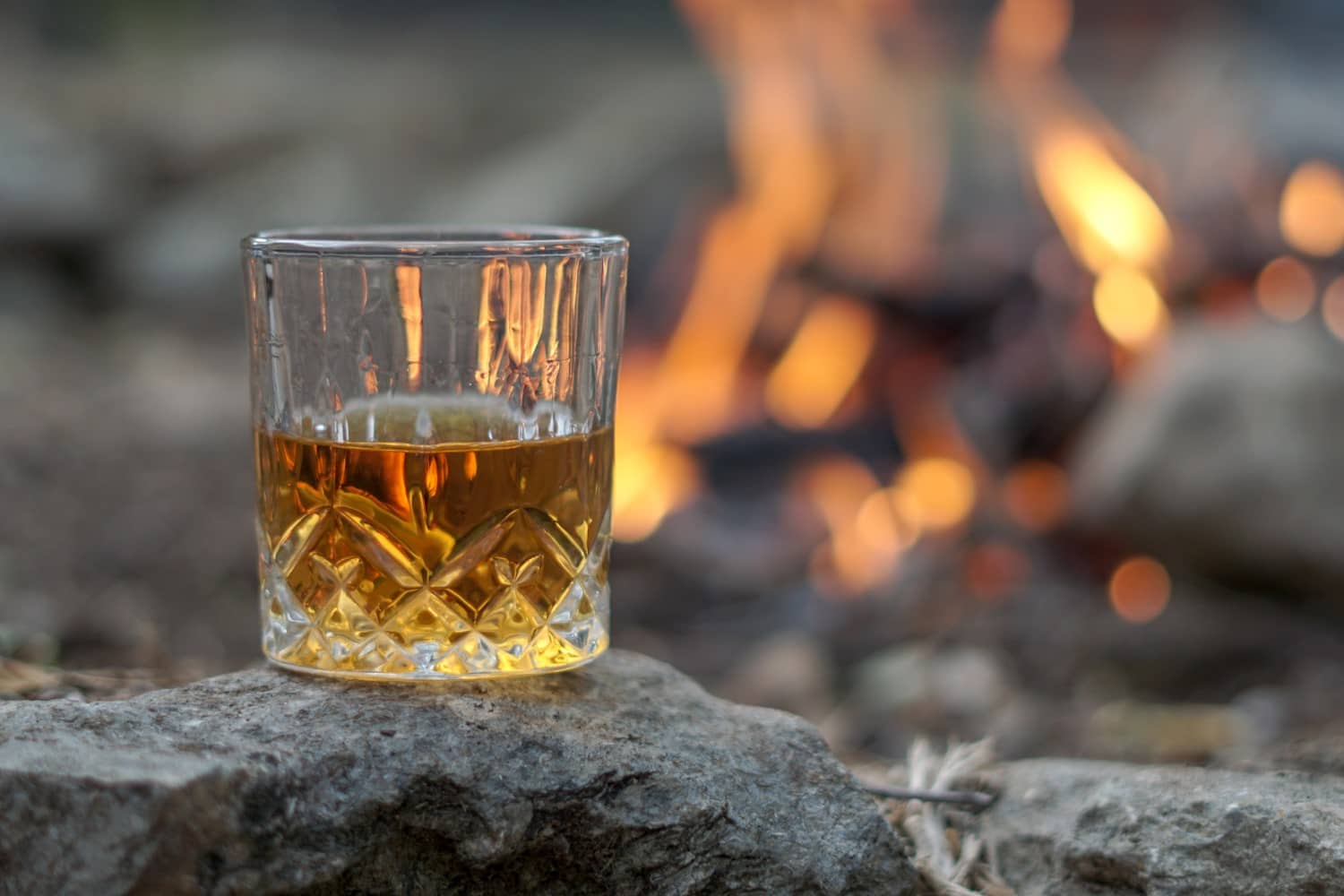 What is Peated Scotch Whisky?

Peaty scotch whisky, also known as smoky scotch, is a whisky subgenre that entices the nose and excites the senses with its intense, smoky flavour imparted by peat in the barley germination process. The quantity of smokiness in a scotch whisky is determined by the period the barley grain is exposed to aromatic peat smoke during drying.

The ancient Scots used peat to heat their pot stills when manufacturing whisky. Smoke is introduced into the barley grain when moist malt dries over a peat-heated fire.

To produce the best peaty scotch whisky, the damp malt has to dry around 30 hours. As a result, the peaty whisky seems to have a diverse range of flavours, ranging from somewhat smoky to almost utterly smokeless.

Get to know more about the production of Peated Single Malt Whisky!

Where Did Peaty Scotch Whisky Come from?

Scots were the first to introduce peat to whisky, which they used to heat the pot stills. Commercial distillation began in Scotland in the 18th century. However, no specific date is documented.

Peat may well have been utilized since whisky is made in places of Scotland like Islay, where there are few other options for fuel, like trees. Peat hasn’t been used as a residential fuel since the 1950s, but it’s now a sought commodity among scotch whisky producers searching for a distinct flavour character.

In order for an expression to the among the best peaty scotch whisky, it needs to have heavy smoke flavours with overtones of dark nutty earth and scented grass or moss. However, it can also have other range of flavour and aromatic notes, such as sea salt brine and coastal minerals flavours if the distillery is located close to the water,as it happens with Islay’s distilleries, for instance.

There are many different types of peat. Each variety with its own set of properties based on the surrounding environment, initial plant matter, proximity to the sea, etc.

When aromatic or guaiacols peats are heated on the stove, they provide a fruity, sweet, honey-like caramel flavour. Syringols, on one hand, provide spicy, dried, salty fruit flavours with strong pepper and spice overtones. On the other hand, phenols are considered medicinal qualities with an antiseptic salty taste, oaky vanilla and chilli peppers.

How Is Peated Scotch Whisky Made?

The buildup of water in bogs inhibits the breakdown of plant material like moss, grass, and tree roots, resulting in peat formation.

How do Peat Fires Generate a Smoky Whisky?

The peaty taste in scotch is derived from the malting process, in which the dried barley absorbs the smoke odour from the burning peat used in the drying process.

Today, most distilleries use commercially malted barley. Malting allows barleycorn sugar to be turned into alcohol by making the starches soluble. To put it another way, malting fools barleycorns into believing spring has arrived. Barleycorns are soaked in water and allowed to germinate before the process is transferred to a kiln.

Peat is then burned to heat the kiln. A very fragrant smoke is emitted into the air and kiln when this occurs. To some extent, this smoke has a significant impact on malt during the kilning process, imbuing it with molecules known as phenols. Iodine, tar, smoke and ash are common flavours.

How is Peatiness in Scotch Measured?

The phenol parts per million (PPM) scale is commonly used to compare the peatiness of whiskies. Rather than the contents of the finished whisky, the PPM relates to the quantity of phenols contained in the malt itself.

Some of the gentler whiskies might have up to 20ppm of alcohol. However, Bruichladdich has been quite active with its Octomore whiskies at the other end of the spectrum. These are among the best peaty scotch whisky and can range from 167 to over 300 parts per million.

However, the grade is only a guideline, and whiskies with similar ppm levels might have vastly distinct flavours.

Ardbeg whiskies, which were created in 1815, are among the world’s most well-known smoky scotch brands. The ten-year-old expression has a light colour and a typical Islay peat scent on the nose, moderate flavours with a lot of iodine on the front palate. This peaty scotch has all the flavours one would expect from peat extracted from coastal bogs.

Ardbeg’s distillery also creates some incredible limited-edition whiskies and a consistent selection that ticks all your boxes depending on your preferences. Original bottle prices begin at $90.

The Ardbeg Uigeadail is another brand’s expression that was awarded several times already, making it one of the best peaty scotch whisky.

The Bowmore distillery has had plenty of time to polish its trade as it was founded in 1779. As a result, their product is one of the most incredible peated whiskies on the market. The use of sherry barrels in the maturation process results in a softer, rounder, and slightly sweeter flavour of Islay peaty scotch.

Bowmore is, then, at the top of the list for entry-level peated scotch whisky, as its expressions are accessible and exceptionally well-rounded. The price of a bottle starts at $65. 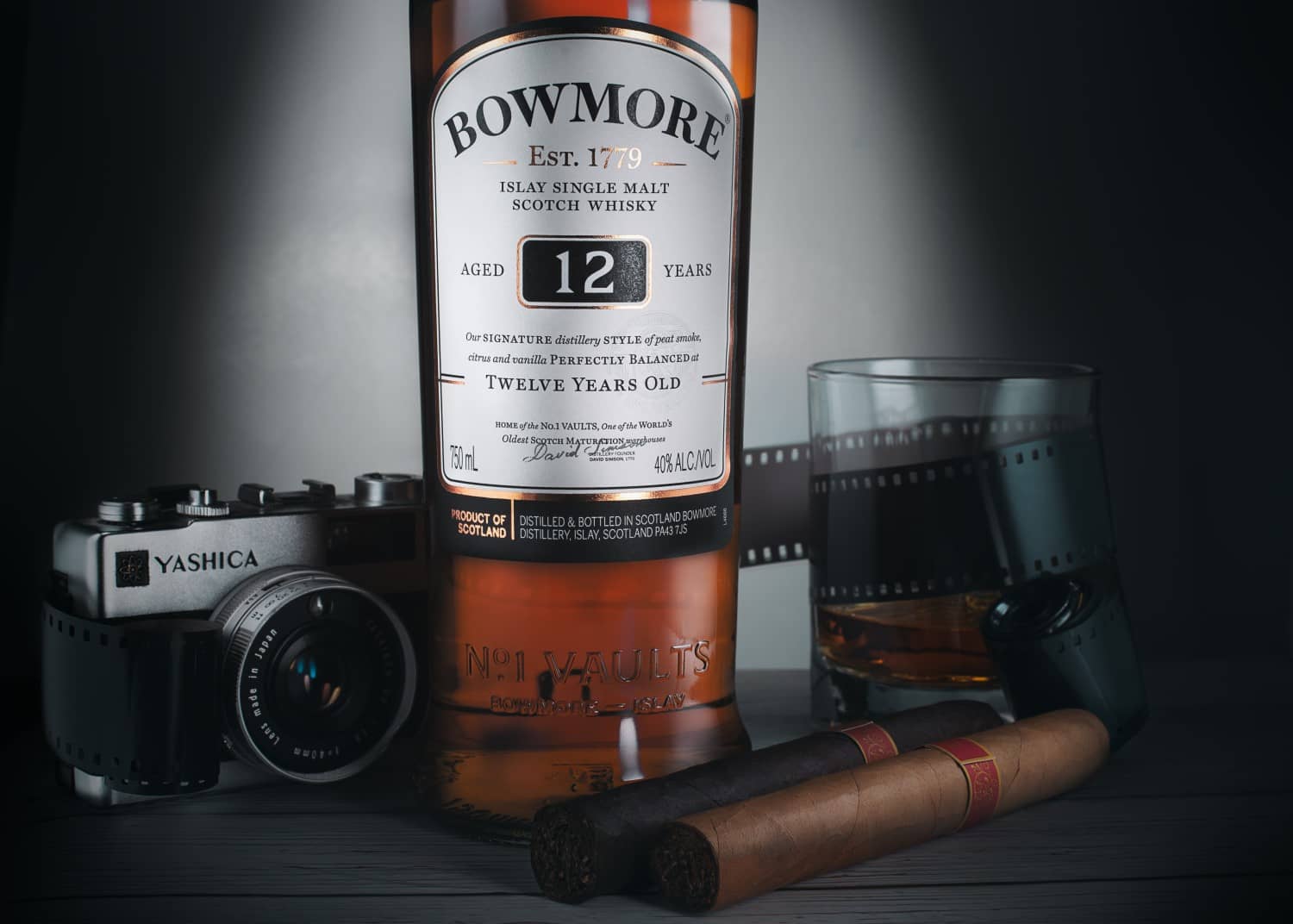 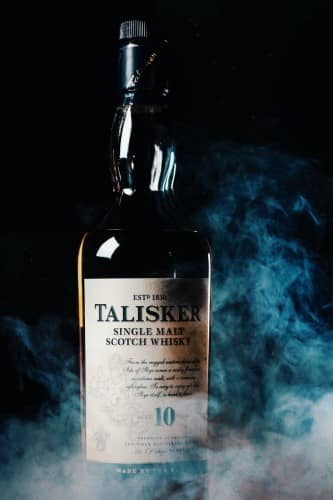 The brilliant phrase produced by the sea encompasses everything excellent about this distillery, which was founded in 1830 and produces what are considered to be some of the best peaty scotch whisky expressions on the market.

Talisker makes arguably the most delicate and beautiful peaty scotch, with only a minimal peat influence, providing for a balanced and subtle drink that doesn’t dominate the nose with lashings of smoke or iodine.

The salty, marine traits unique to everything formed by the water are abundant. Bottles start at $105 and go up from there.

Octomore’s entire range is cleverly designed to exhibit a different side of heavily peated whisky by composing fine, delicate and complex drams with gargantuan PPM levels.

Octomore’s peated scotch whisky is widely regarded as one of the best-peated whiskies money can buy. So far, their highest release has been above 300PPM. The price of a bottle starts at $170.

Founded in 1881, this is the first of two ghost distilleries on this list. A ghost distillery is one that no longer exists, although specimens of its trade may still be obtained on the market.

Many crafts are frequently still sitting in barrels. If you’re looking for a classic example, it is one of the best peaty scotch whiskies money can buy. This rare Islay distillery doesn’t use peat to produce its whiskies. The price of a bottle starts at $95.

Bunnahabhain is a coastal distillery that has produced some of the best Islay whisky since 1883. Still, it hit its stride in 1960 when someone had the foresight to build a real road connecting their tiny village to the rest of the island. 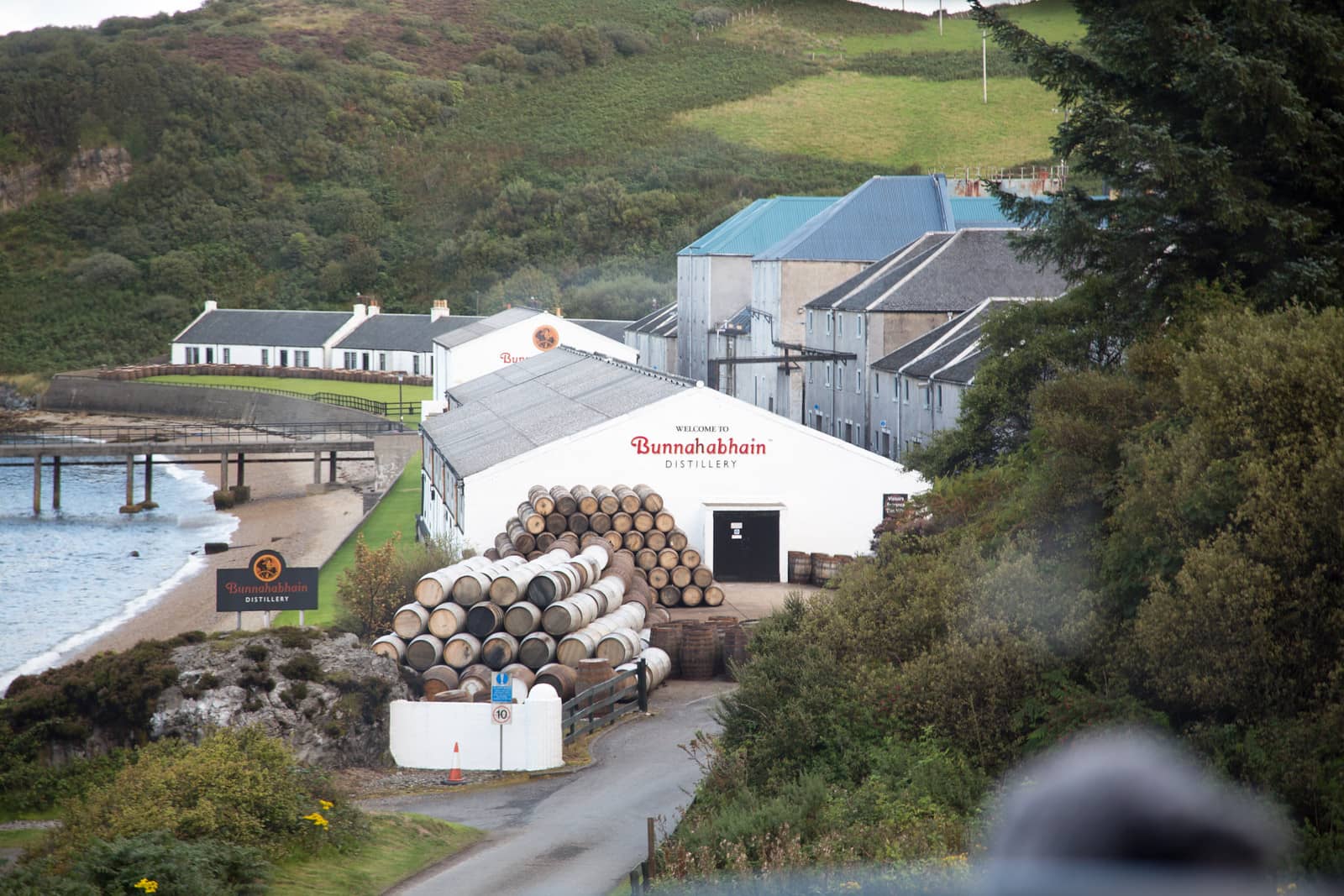 Kilchoman is not located on the coast. Instead, it is located on a farm inland on the western part of the island. This distillery was founded in 2005, and it’s process is completely unique. It produces a single farm whisky rather than a single malt whisky, as all the barley used in the production is farmed in the nearby fields and malted on-site.

Kilchoman is regarded as one of the best peaty scotch whisky brands money can buy, with various styles available. Bottle prices start at $75.

The Caol Ila distillery is located just south of Bunnahabhain. This is one of the more unusual smoky Scotch products founded in 1846.

Though more than 95% of Caol Ila’s output is used to make blended whiskies like Johnnie Walker and Black Bottle, the single malt expressions are widely regarded as some of the most fantastic and among the best peaty scotch whisky in the world.

Caol Ila’s peat dances on the tongue, fruity, flowery, and peppery, leaving an immaculate, iodine-rich finish that makes the dram incredibly moreish. The cost of a bottle starts at $85. 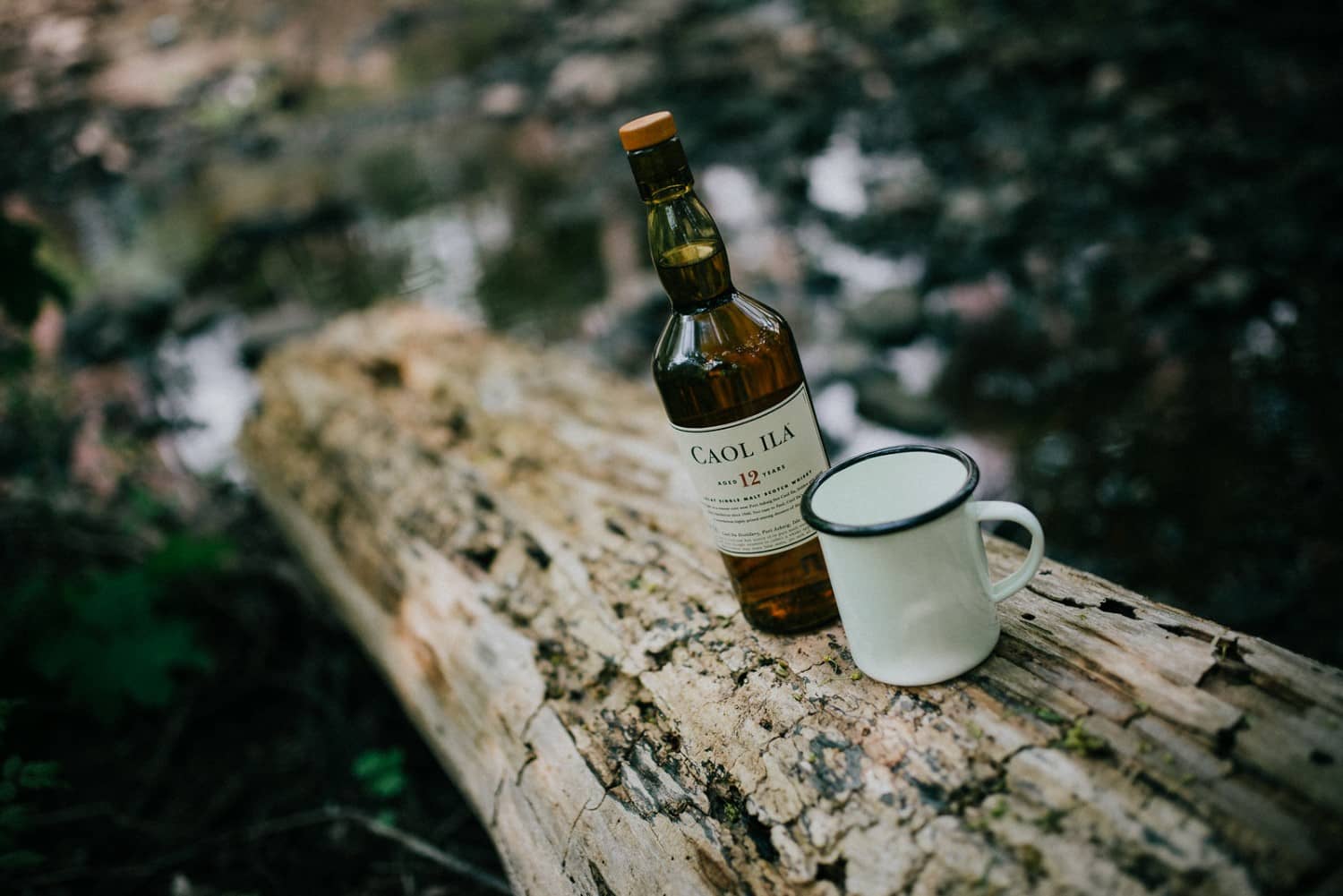 Laphroaig has been producing single malt whisky since 1815, and it shows in the bottle. The 10-Year-Old expression, which is pale in colour, is a terrific place to start for the numerous and various wonders that their broad offering encompasses and peated whisky in general.

The typical iodine smoke doesn’t detract from this being an easy-drinking dram since it is balanced with the rest of the flavour profile. Bottle prices begin at $50.

Lagavulin developed a reputation among peaty scotch lovers long ago as part of the massive Diageo single malts collection. Still, it may have gained prominence courtesy of Nick Offerman’s character Ron Swanson on NBC’s Parks and Recreation.

Most whisky drinkers favour Lagavulin’s 16-Year-Old expression as the first bottle they go for when in need of a smoky whiskey. It is distinctively peaty, balanced, round, and polished. Bottle costs begin at $105.