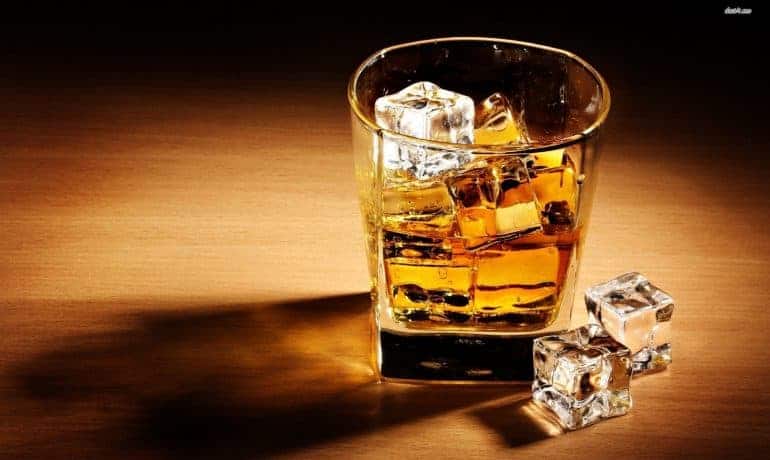 Whiskey on the rocks

There are plenty of people – hundreds of millions, really – that consider whiskey to be the very best drink ever come up with by man, and that to mix it with anything (ANYTHING) is a sin of the highest caliber.

Some of the best whiskey on the planet is designed specifically to be enjoyed all on its own, without any help from bar mixers, fruity juices, soda pop, or anything else you can think about throwing into a glass with a top shelf bottle of whiskey.

No, when you’re drinking something really special you want to make sure that it’s able to shine all on its own. You wouldn’t slather a beautifully cooked piece of prime rib with a massive blob of ketchup, would you?

At the same time, however, recent research has conclusively proven that you are able to elevate everything special about a fine whiskey by adding just a little bit of water or of a cube – A CUBE – of ice to at least two fingers of this incredible spirit.

Yes, believe it or not the experts say that whiskey on the rocks is the best way to drink top-notch whiskey, with whiskey neat closely following it and everything else a mile or two behind.

Before you add the ice and put your whiskey on the rocks, try it neat

The best thing about this news is that you don’t have to take our word for it just because we say so.

The next time you’re getting ready to settle down with a wonderful glass of whiskey, poor it so that it is completely neat (100% straight) and then give it a sip or two so that you can really savor everything that it brings to the table.

You’ll be able to pick up everything that the distillery wanted you to when you take this approach, and this is why so many people say that drinking whiskey neat is the only way to drink it. Nothing added guarantees that what comes out of the bottle is what you get to enjoy, and for most people this is the most authentic way to enjoy a top-notch spirit.

Add a couple of drops of water next

The next thing you want to do (after taking a sip or two of your whiskey neat) it’s add just a couple of drops of water to the whiskey itself.

Experts believe that a splash of water releases the hydrophobic elements of the whiskey, forcing them to “come out of their shell” while giving you a chance to enjoy a more authentic nose and (in turn) a more authentic flavor at the exact same time.

You see, what we smell heavily influences what we actually end up tasting. This is why when your nose is stuffed up when you are feeling under the weather food seems to lose all flavor.

By adding a splash of cool water to your whiskey you’ll be able to wake it up, lower the alcohol content, and enjoy some of the flavors that might have been hidden behind a more traditional whiskey burn.

Put your whiskey on the rocks

Well, we don’t recommend that you put your whiskey on the rocks but instead on the rock – abandoning the approach to overload your favorite whiskey with a couple of ice cubes and instead add just a single one to the mix.

This is going to allow water to slowly release into your whiskey, cooling your whiskey down so that flavors can awaken while at the same time chilling things and making it easier to sip and enjoy.

This approach guarantees you are able to enjoy and appreciate everything that a particular whiskey brings to the table while dropping the alcohol level just enough to have one or two whiskeys on the rock without it forcing you to wake up with a major headache in the morning!