Located in the Tomatin village in Scotland, the Tomatin distillery offers single malt Scotch whisky since 1897. The Tomatin whisky is classified as being from the Highlands, being one of Scotland’s largest whisky regions. The highlands whisky offers an array of different styles with rich and textured fragrantly floral flavours due to its rich landscape and products. In the Highlands, you will find the most famous Scottish whiskies such as Glenmorangie, Dalmore, Dalwhinnie, GlenDronach, and others.

In 1984, the distillery was forced into liquidation, which allowed the Japanese conglomerate, Takara Shuzo to purchase the company and bring it to its success. This allowed for the first Japanese owned Scottish distillery; bringing the two worlds closer than ever before. The Japanese interest in the whisky world was already strong and sturdy as the exports were increasing year by year.

Currently, 80% of its production is of blended whisky however, the distillery has been reinforcing its core business to the production of single malts as it has expanded its entire core range accordingly. Some limited editions are often developed by the Tomatin distillery such as its 32-year, 40-years and single cask ranges. One of its unique offers is the Cù Bòcan whisky. Tomatin Cù Bòcan is a light single malt produced for a week, once a year at the distillery.

The legend of a spectral dog named Cù Bòcan is quite famous in the Highlands region. Legend has it the Cù Bòcan was seen by a distillery worker after it ran away. The worker felt the need to touch the dog’s fur and as soon as he reached his hand, the dog disappeared into fin air as a ghostly smoke.

Nowadays, the Tomatin Distillery makes a peated whisky for a week, every year. This unique a ghostly edition is matured in a mix of virgin oak, bourbon and sherry casks offering a unique blend of notes, fragrances and tastes to this whisky.

You will feel a blend of citrus smells leading to a fresh and floral bloom. Once you have a sip of Cù Bòcan, the flavour of smoke will come through slowly with a nutty and chilly soft taste.

Be sure to try it before it disappears again. 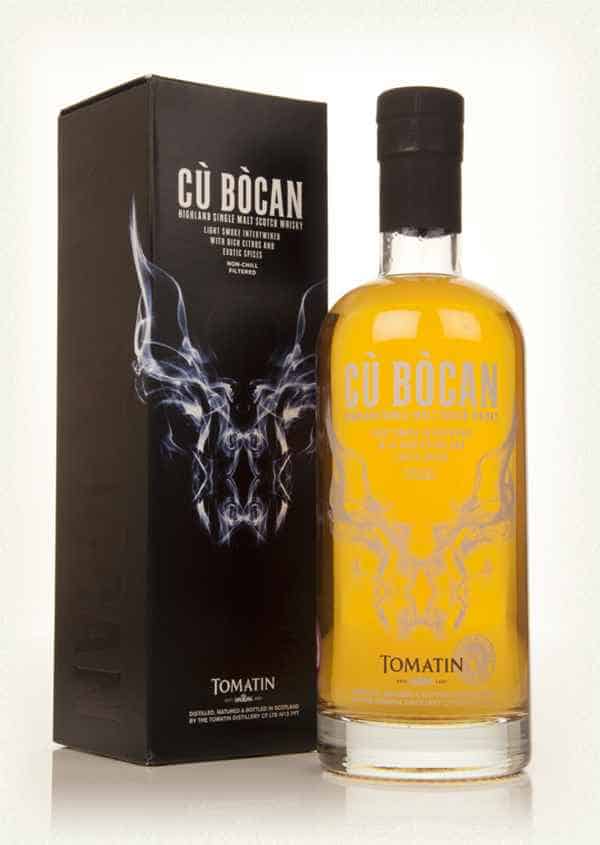 Since the early days of the distillery, Tomatin has been combining the mountain water with the local barley, introducing it to the copper still and the oak casks for its maturation. This process is detailed and precise and all the elements are crucial to the creation of this incredible beverage.

To celebrate this, the Tomatin distillery developed the series of Five Virtues, with each offering an unique expression, flavour and notes. 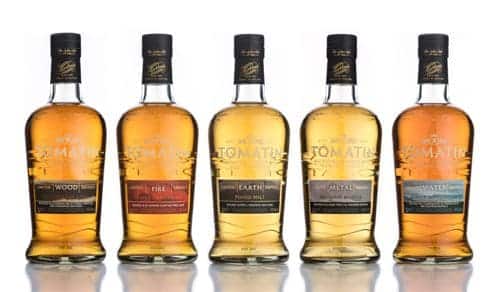 Introduced in 2014, the Tomatin 14 Year Old is a special selection from the Tomatin Distillery. It has all the special characteristics of a Highland Single Malt, which was matured in a bourbon barrel with specially selected Port Casks. This offers a unique wine-like sweetness to the whisky elevating this selection to its highest notes and taste.

The first impression you will have with the Tomatin 14 Year Old is a powerful smell of red berries, grapes, vanilla, oak and a soft touch of white pepper. On the first sip, hints of dark chocolate with strawberry will emerge in your palate. Following this, crushed almonds, walnuts and jam notes with oak will leave a soft and fruity taste.