Whisky lovers are becoming more and more eclectic in their tastes, and we are beginning to see an interest in distilled beverages outside traditionally producing countries. One of the countries that is currently producing quality whiskey is Switzerland. With a small production, the Swiss whiskey already has some attention, especially by the work done in the Langatun distillery.

The Langatun distillery is Switzerland’s biggest whiskey distillery. Although the distillery only began to produce whiskey in 2005, it was always a family ambition to become whiskey distillers. Specializing in single malts, you’ll find all the best aspects of your favorites in these bottles.

In this post, we’re looking a bit deeper into Langatun’s production. We’ll take a look at the different distilling methods, their specialty product lines, and which whiskies stand out and why. We hope this entices you to explore the world of Langatun and diversify your whiskey palate.

When you think about whiskey, you probably only think about traditional bourbons, scotch, and Irish whiskey. There are so many other great distilleries around the world that are bringing some new flavors and textures to this spirit’s world. Switzerland is one of these countries, with distilleries such as Langatun. This premium spirits distillery produces many popular spirits, including, of course, their Langatun range of single malt whiskies.

The company has spent time perfecting the art of whiskey distilling. Most of their whiskies rate very highly amongst enthusiasts and connoisseurs alike. The distillery has several lines of whiskies which each speak to the different aspects of the distillery’s craftsmanship and history.

Langatun distillery is located in Aarwangen in Switzerland. The beautiful Swiss-cottage style facility is about a 2-minute walk up from the Aare river. In amongst the stunning surroundings, you’ll be able to enjoy whiskey here on a whole new level.
If you’re planning on visiting the distillery, it’s probably best to fly into Bern airport. Aarwangen is only about 40km from here, plus you’re visiting Switzerland so the views are bound to be nothing short of spectacular!

Langatun distillery is located in Aarwangen in Switzerland. The beautiful Swiss-cottage style facility is about a 2-minute walk up from the Aare river. In amongst the stunning surroundings, you’ll be able to enjoy whiskey here on a whole new level.

If you’re planning on visiting the distillery, it’s probably best to fly into Bern airport. Aarwangen is only about 40km from here, plus you’re visiting Switzerland so the views are bound to be nothing short of spectacular!

The Langatun distillery was founded in 1857 by Jakob Baumberger. However, it only began distilling whiskey in 2005, when Hans Baumberger III began to produce the handcrafted malts that his great grandfather always wanted.

Besides being in business for over 150 years, before it became a gem of Swiss whiskey and spirits, it was a successful brewery that survived the harsh effects of economic depression and the war from the late 1930s until the mid-1940s.

Since the beginning, Jakob Baumberger always wanted to establish a successful single malt whiskey distillery, however, he was held back by the Swiss government’s ban on distilling anything with grain or potatoes.

The ban was brought into place in 1939, during World War 2, as these vital ingredients were deemed too important for the people of Switzerland’s nutrition. With global rations, restrictions had to be placed on staples such as these, and alcohol was seen as a luxury rather than an essential.

Since the lift of the ban in 1999, it has been Hans Baumberger III’s mission to establish Jakob Baumberger’s initial vision, and turn the distillery into a reputable single malt whiskey producer.

The first single malt whiskey to break onto the market in 2008 was the 3-year-old Langatun “Olde Deer” Single Malt. In the same year, the whiskey won a gold medal on the esteemed Schnapsforum.

Since then, the Langatun distillery have won many awards due to their whiskies, and, recently, even broke onto the world stage with their Langatun “Old Bear” Smoky.

Although the most recent history began in 2007, the fact is the origins of this distillery date back to the 19th century, more precisely in 1857 when the Baumberger family took over a small brew. After many years off, it has reopened in 2007 by one of the great-grandchildren of the distillery’s founder.

Whisky Expressions by the Langatun Distillery

After its reactivation, the Langatun distillery began to produce several distilled drinks, among them the Swiss whiskey. In addition to the Old Bear and Old Deer, this distillery offers even more whiskies or derivatives: Gold Bee (a whiskey liqueur), a blend of whiskies from Scotland and a bourbon whiskey.

With regard to Swiss whiskey produced by Langatun, it has been increasingly recognized in and out of borders, because of its quality and its unique features.

Langatun has a wide range of whiskies that are all great for different reasons. We’ve taken the three that rated most highly on various platforms. These will hopefully give you a good idea of what you can expect from the best of Langatun whisky.

Some of the Langatun expressions were sent to our costumers in previous whisky tasting boxes. Check out the details, you might get lucky:  https://www.whiskyflavour.com/shop/whisky-subscription-tasting-box/ 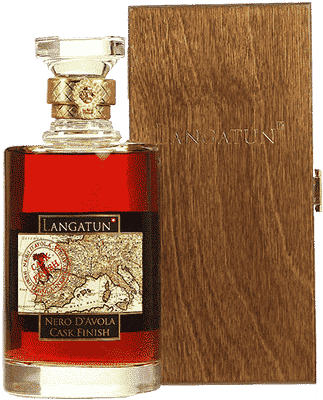 The 2011 Nero d’Avola Cask Finish Single Malt whisky is one of the highest-rated whiskies that Langatun Distillery has to offer. This stunning single malt is for anyone who loves rich flavors and complex woody notes.

Nero d’Avola is a red wine grape varietal originating in the south of Sicily. The whisky is aged in these barrels before bottling which gives a certain dryness to the spirit. Following pre-storage, the whiskey is moved into a rum barrel for a year of post-maturation.

This bottle is the perfect combination of rounded flavors with a woody dryness.

As you swirl your whisky to release the aromas, you’ll get a definite scent of fresh oak and a more complex hit of dark chocolate and vanilla. The strong oak on the nose is attributed to its pre-storage phase in a Chardonnay barrel.

The langatun 2011 Nero d’Avola Cask Finish has flavours of coffee on the palate and it finishes with hints of bitter cocoa.

It’s obvious that 2011 was a great year for Langatun distillery. Another favorite amongst whiskey enthusiasts is the 2011 Jacob’s Dram Single Malt whisky.

Dedicated to the founder of Langatun, this bottle is matured in the best casks the distillery could find. This single malt boasts of incredibly intense flavors, making it well-rounded and rich. This one is for those who enjoy their bold whiskies that awaken the palate.

On the nose, you’ll get a sweetness similar to dried dark fruits. The distillers also ensured that the maltiness of the whisky remained, so look out for hints of fresh bread dough too.

The palate is just pure indulgence and everything a whisky enthusiast looks for in a single malt whisky. The quality of the casks comes through in flavors of vanilla, roasted nuts, and, of course, round, woody flavors.

What’s probably more impressive about this whiskey is the finish. A sip of this will finish with sweet and roasted flavors. The distillers describe it as long and round with a warmth in the aftertaste. It sounds like the perfect hug from the inside! 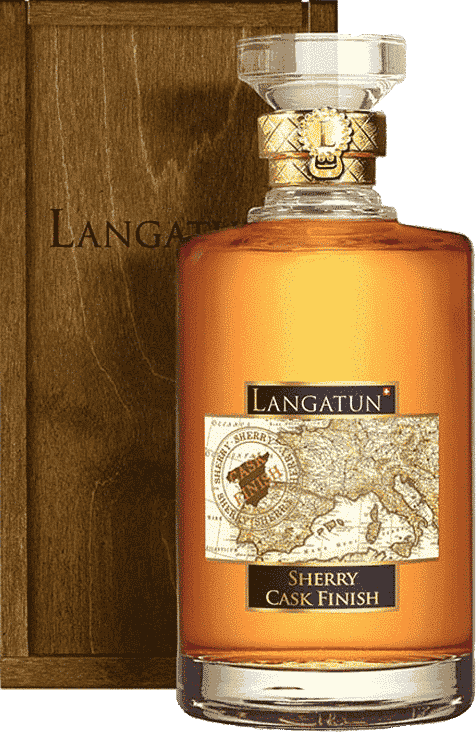 As the name suggests, the Langatun Sherry Cask finish is ages in an American oak sherry barrel, refining the flavors of the whisky to bring you sweet and spicy flavors.

This single malt whisky also starts off in a Chardonnay barrel which is great for enhancing the woody flavors and dryness. With this particular whisky, the dryness is perfectly balanced with a sweetness that is achieved in its finishing.

Aromas and sherry and oak will immediately strike you as you nose this single malt. As you continue the nosing process, you’ll pick up more and more spiciness and hints of lavender.

The palate presents you with definite sherry spice along with notes of ground pepper. To really round off the initial tasting, flavors of rich salted caramel come through, making this single malt a perfectly balanced delight.

Owing to its sherry cask finish, the whisky finishes with lingering notes of a typical single malt aged in this style.

We’ve put this on the list because it was this very whisky that put Langatun on the whisky map! As the first bottle produced by Hans Baumberger III, it was the one that was going to make or break his and his great grandfather’s dreams of becoming Swiss whiskey distillers.

Luckily, this won Langatun an award the same year it was released and that’s why it’s an absolute must-taste for anyone who is curious about the Langatun distillery and its style of craftsmanship. This single malt forms part of the heritage line, along with other single malts; Old Crow, Old Bear, and Old Woodpecker.

If you’re a fan of that smoke that drives some of our favorite single malts then this one is for you! The process takes a blend of some of the best barley that has been smoked over beechwood. The barley is then fermented with an English stout yeast.

The smoke is further enhanced by the aging process as it is stored in red wine barrels. Overall, this is the perfect winter tipple!

Langatun whisky is great for anyone who is wanting to try something a little different, and branch out from the brilliant, yet traditional whisky producers. Langatun is putting Swiss distilling on the map, even though they have not been producing their whiskies for very long.

Their quick rise to success speaks to the love and craftsmanship of the whisky makers. You can’t help but admire the sense of family, history, and love that surrounds the Langatun brand and filters into their fantastic production.