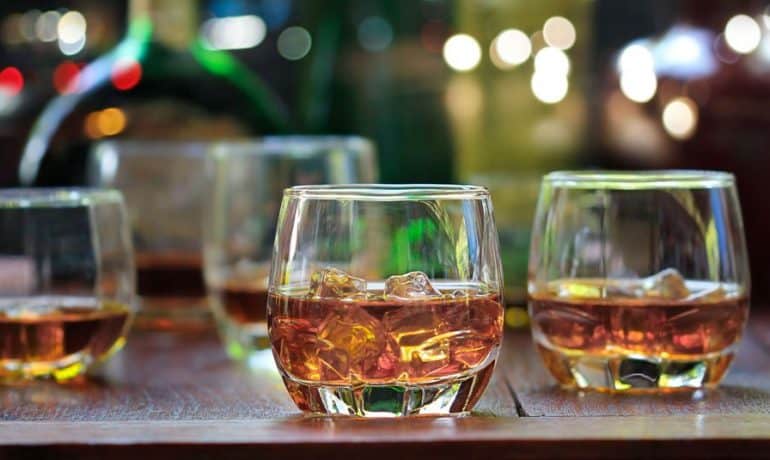 Time to understand the big difference between a whiskey and a bourbon. What type of whiskey is it? How is it made? Its history? The origin? And its legal requirements? No, we will not give you a book to read. We will just give you some insights so that you understand what Whiskey Bourbon is. Moreover, for you to go and try it out!

Around the late 18th century the Scots, Irish, and most probably also the English, Welsh and French started farming and distilling in Kentucky. However, the origin of bourbon as a distinctive type of whiskey is not very well documented. There are some legends and claims around it, but nothing for us to affirm completely.

Elijah Craig is often attributed as the inventor of this whiskey. He was a Baptist minister and distiller in Kentucky County. It is said that Elijah was the first to age the spirit in a charred oak cask, which is the process that gives bourbon its reddish colour and unique taste. Jacob Spears is another person who comes into the history of the spirit. According to sources, he was the first to label the product as a Whiskey Bourbon.

Most probably, there was not “one” inventor of this spirit. In order to make whiskey, you can use any type of grain, and the practice of aging whiskey and charring barrels for a unique flavour was already done across Europe for centuries.

According tovanother legend, Michael Veach, a historian states that the name came after the Bourbon Street in New Orleans. Here you can find a major port where shipments of the Kentucky whiskey were sold. This was a cheap alternative to the French cognac.

Although all these stories seem fascinating, the spirit itself is ever more amazing. Let’s find out how it is made.

In order to sell this drink officially as a Bourbon, it needs to contain a minimum of 51% corn. The remaining can be any type of cereal grain. The grains are ground and mixed with water. Normally, a mash from a previous distillation is added in order to create some consistency across the batches. This creates the sour mash. Afterwards, yeast is added and the mash is fermented. Typically, it is distilled between 65% and 80% alcohol using a traditional pot still or acontinuous still.

This process results in a clear spirit normally called “white dog”. It is placed in a charred new oak barrel for aging. The wood used normally is American White Oak, gaining its unique colour and most of its flavour. This is a result of the charred wood which offers the unique caramelized and vanilla flavours.

How to drink it

Like any other whiskey, Bourbon is served according to your preference. You might want to try it neat or diluted with water. On the rocks is also a favourite however, mixed with other drinks or in cocktails give this type of whiskey a spot in the cocktail world. This is because a Bourbon is rich in flavours specially the sweeter notes. Because of this, some people also use this spirit in cooking or for medical purposes.