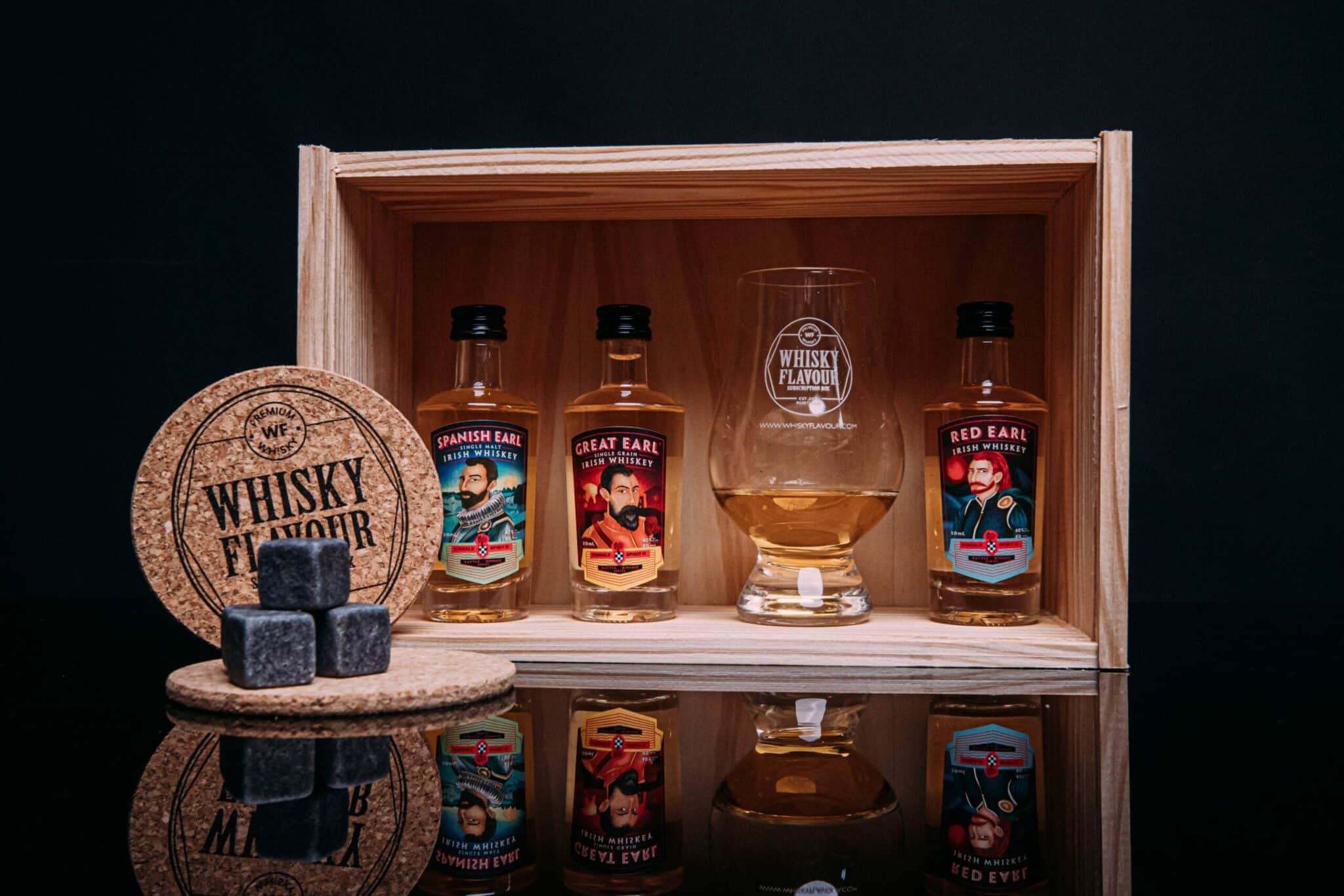 From the mistiness of Irish history, one audacious brand has emerged to conquer the whisky world. Shielded with several awards and wielded with three outstanding expressions, there is no doubt Kinsale Spirit Company knows the right strategy and has the right allies to win.

The Irish Whiskey company came up with a great concept for their whiskey: The Battle of Kinsale’s Heroes, who fought bravely against the English Crown’s military, so that Ireland wouldn’t fall into England’s influence. 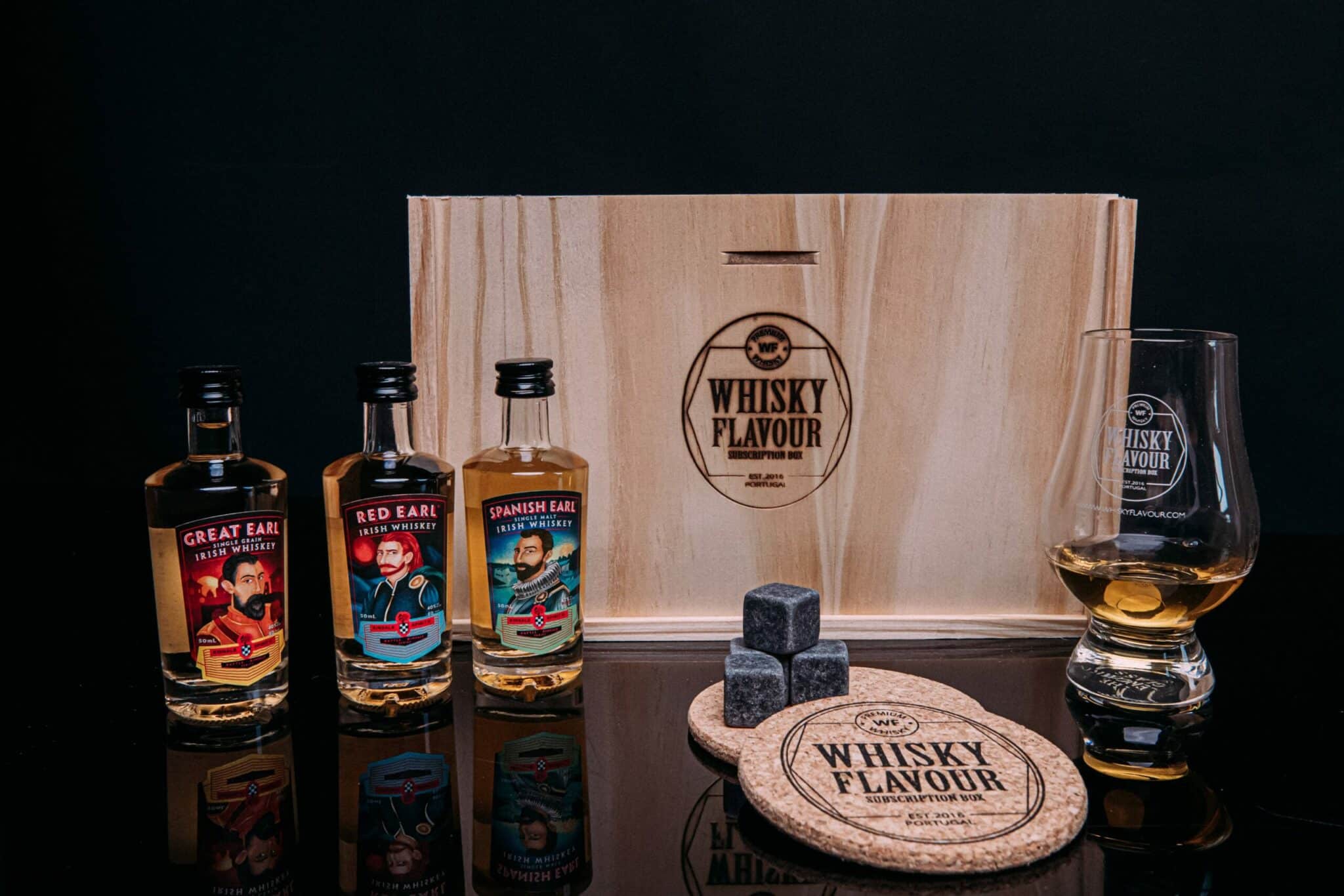 The collaboration you didn’t know you needed. The Kinsale Spirit Company Irish Whiskey Tasting Box is an exclusive product that will be your ally while you’re tasting three new and bold whiskey expressions.

What this box will bring you:

The “Nine Year’s War”, that took place in the 17th Century, served as background to the range of Irish Whiskey launched by the Kinsale Spirit Company. During this war, the Irish troops fought bravely against Queen Elizabeth’s forces, having driven the English Crown out of Ireland. However, and besides all efforts, the war culminated with the Battle of Kinsale where the Irish were defeated.

While the “Nine Year’s War” was ongoing, there were several characters that made history by joining rival clans and giving hope to the Irish people. Heroes such as the Red Earl, the Spanish Earl and the Great Earl fought bravely against the English Crown and are now immortalized in three Irish Whiskey expressions that live up to their name.

To honour these noble and great warriors, the Kinsale Spirit Company Irish whiskey expressions represent their bold and daring personality. To do so, the company chose to have three different kinds of whiskey: Blended Malt, Single Malt and Single Grain. Besides, each whiskey is matured in wooden casks that bring to mind the regions where Earls campaigned and travelled before and after the war. 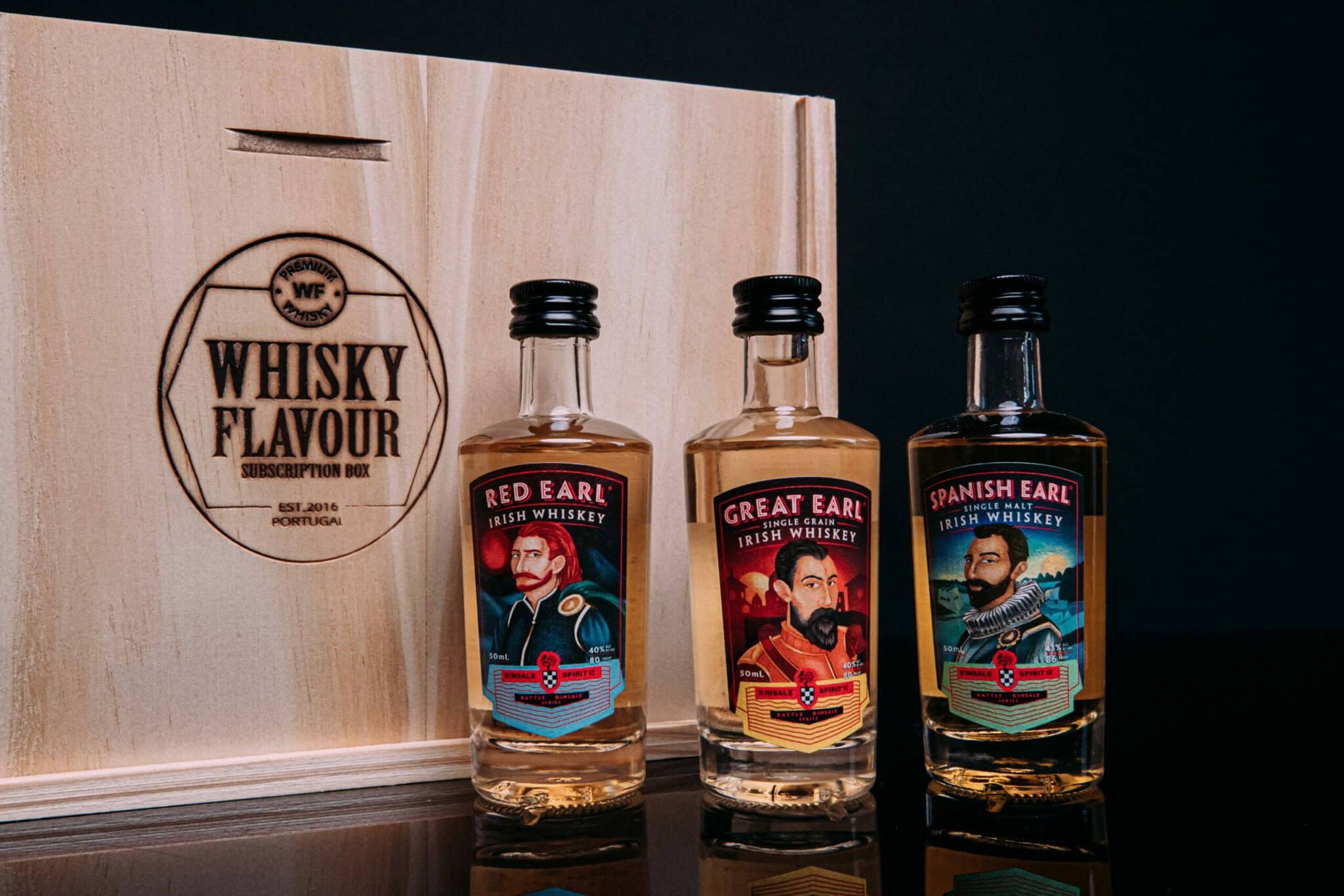 3 Brave Spirits Brought Together Once More

This expression was produced as an homage to one of the Ireland’s greatest heroes: Red Hugh O Donnel, or the Red Earl as he was called. The Red Earl was responsible of making powerful allies within the several Irish clans, including their main rival. These alliances were key to have several victories against Queen Elizabeth’s troops.

Honouring this great fighter and battle strategist, Kinsale Spirit Company Red Earl Irish Whiskey is a blend that combines ex-bourbon barrels’ grain and triple distilled malt from ex-sherry casks. The final stage of its maturation is spent in ex-Rioja Casks, since Red Hugh O Donnel spent his last days in the region of Rioja, Spain.

Have a taste of Red Earl Irish Whiskey:

Aromas – Fruity and floral with hints of strawberry and cherry as well as citrus and rose petals. Has also notes of oak, marzipan and almond.

Flavours – Sweet and spicy flavours with almonds, toffee and vanilla notes, as well as cinnamon and cloves flavours given by the rioja casks.

Finish – Long and warm with a medium bodied mouthfeel.

A single malt to celebrate and honour Juan del Aguilla, the Spanish Earl who fought alongside the Red Earl and the Great Earl at Kinsale’s Battle. The Spanish Earl was called to fight at Kinsale and he answer bravely.

Being from Spain and having campaigned in Cork, the Spanish Earl Irish Whiskey Single Malt is a triple-distilled and triple-cask expression. The Kinsale Spirit Company Single Malt spends the first years of its maturation in ex-bourbon casks. The spirit is then divided being that one half ages in ex Stout casks and the other in golden Jamaican Rum casks. 3 months later, the two spirits are brought together and bottled.

Have a taste of Spanish Earl Single Malt Irish Whiskey:

Finish – Long with a hint of raisins.

Hugh “The Great Earl” O Neill was part of Red Earl’s rival clan, until a common enemy brought them together. The Earl defied the English troops and fought side by side with the Red Earl and the Spanish Earl. By the end of Kinsale’s Battle, The Great Earl, left Ireland and went to Rome. Until this day, a fresco with his image remains at the Vatican City.

The Great Earl Single Grain Irish Whiskey combines grain from virgin oak casks and Irish Whiskey grain from Rechard barrels. The last stage of the maturation takes 3 months and takes part on ex-Sangiovese casks from Lazio, Italian region where the general is still buried to this day. The ex-Sangiovese casks are a unique choice regarding whiskey production and they are sourced exclusively for Kinsale Spirit Company.

Have a taste of Great Earl Single Grain Irish Whiskey:

Taste: Sweet, fruity and spicy; Honey, blackberries and elderberries; White pepper and tanin from the wine.

Finish: Long and strong, with a creamy mouthfeel.

The best way to win a battle is to have great allies. And, in order to tell a great story and deliver amazing Irish whiskey expressions, we partnered up.

WhiskyFlavour aims to present unique and exclusive whiskey expressions from all around the world to people that are in love with this spirit. Therefore, this partnership is a logical step towards our mission, since Kinsale Spirit Company produces Irish Whiskey with unique characteristics. 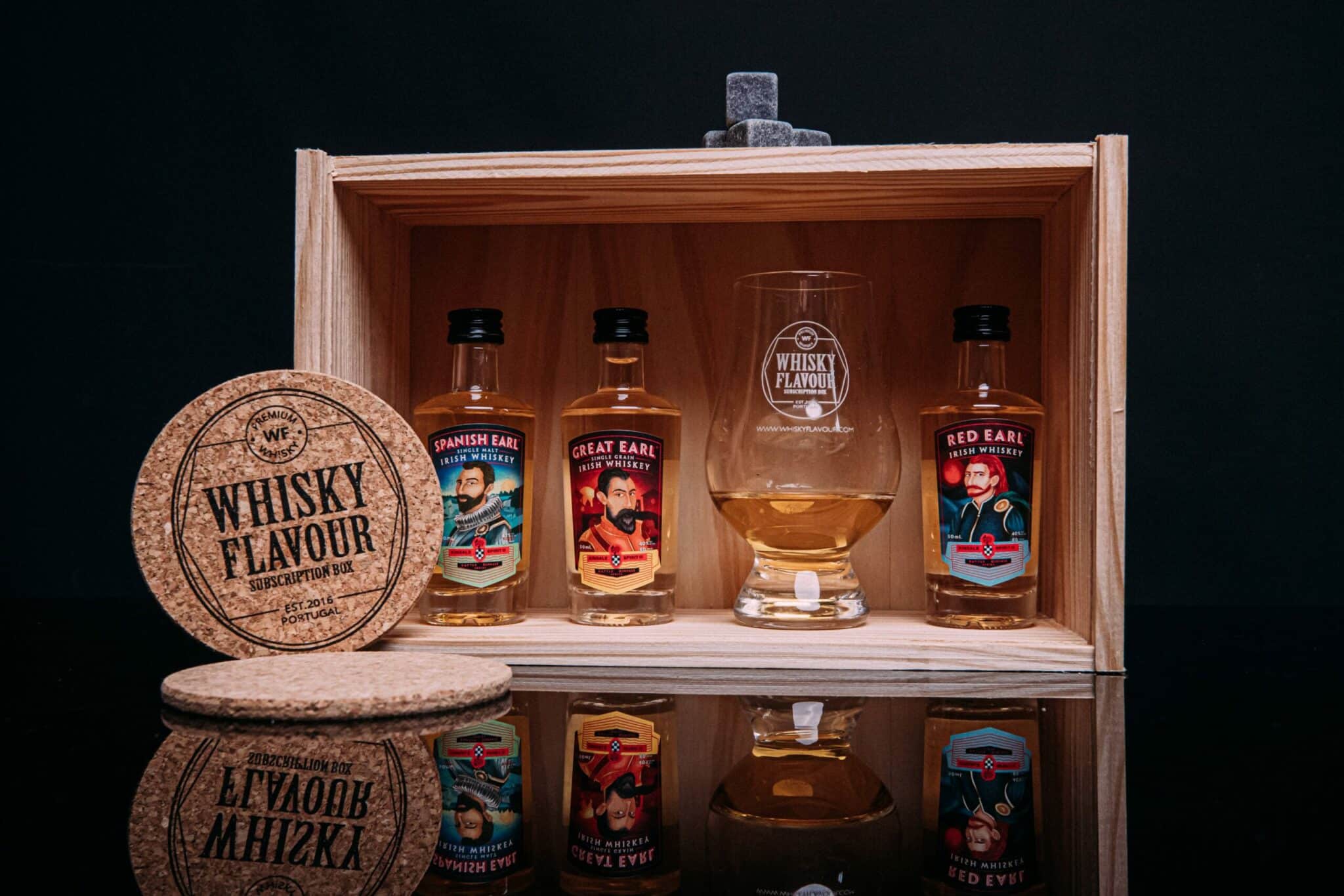 A young company with stamina enough to produce award-winning spirits, from Gin to Whiskey.

The Kinsale Spirit Company got its name due to the location where its founder, Tom O Riordam, started his business. The community in this coastal region of Ireland inspired his recipes and the concepts that come with the Spirit Company.

Tom O Riordam first started producing small batches of gin that become so well-known, the company is already exporting to several markets such as China and EUA. Only after that, Tom, Ernest Cantillon and Colin Ross (Tom’s associates), decided to take a leap of faith into the Irish Whiskey Market.

3 Outstanding Spirits, an Irish Tale of Bravery and a Tasting Box

Order your WhiskyFlavour x Kinsale Spirit Company Irish Whiskey Tasting Box and have the opportunity to taste 3 brave expressions while exploring one of the most important battles of Ireland’s history!