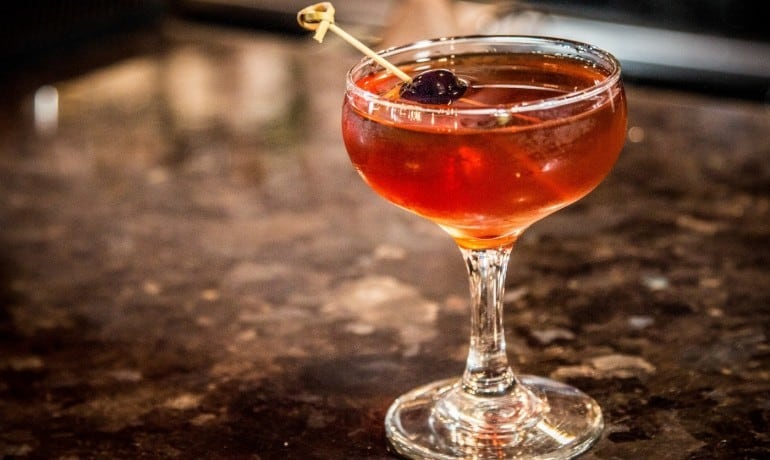 The Manhattan Cocktail is one of the bestknown cocktails made with whisky. Already more than a century old, this refined drink and reminiscent of the crazy parties of the 1920’s, continues to make success worldwide. Initially made with American whiskies, there were soon several versions, including one with Scotch whisky.

There are several versions on the origin of this cocktail in which the best-known is dated in the year of 1874. The story says in that year, in New York City, a bartender at the Manhattan Club, invented this drink at a party where some famous personalities were found. At that party, Jennie Jerome, Winston Churchill’s mother, offered the drink to the presidential candidate of the United States, Samuel J. Tilden, whom loved the cocktail. The party and the cocktail were a great success, catapulting the Manhattan Cocktail to fame.

However, as all these stories always have several versions, there are those who believe that it was Jennie Jerome, also known as Lady Randolph Churchill, to create the drink. And there are also some who argue that Lady Randolph was in France at the time, which would make this whole story into fiction.

Either way, the most common version is the first, where Lady Randolph, along with the bartender, gave rise to such a drink. In fact, this cocktail may be just a very close copy of another drink. In the book Bar-Tenders’ Guide, written by Jerry Thomas, there is a cocktail very similar to the Manhattan Cocktail. Now, since this book precedes the creation of such a beverage, it is natural to conclude that the Manhattan Cocktail has been copied in the original.

Now that you know the origin of this drink, then you can know the recipe and how to make a Manhattan Cocktail.

As we mentioned above, traditionally this cocktail is made with whisky produced in the United States, specifically rye whisky. However, they can still be used in original recipe drinks like bourbon, Tennessee or Canadian whisky. Then there are some variations, such as the Manhattan Cocktail with Scotch whisky.

The preparation of the Manhattan Cocktail is very simple. Add whisky, vermouth and bitters and mix with a stick. Relative to bitters, various types can be used, from Peychaud bitter, orange bitters, etc. To finish it is enough to place a cherry in syrup crossed by a toothpick inside a glass.

The Manhattan Cocktail version made with Scotch whisky is very simple, since you just have to make the previous recipe, using a Scotch instead of an American whisky. For scotch lovers, this is a great choice for a delicious cocktail.