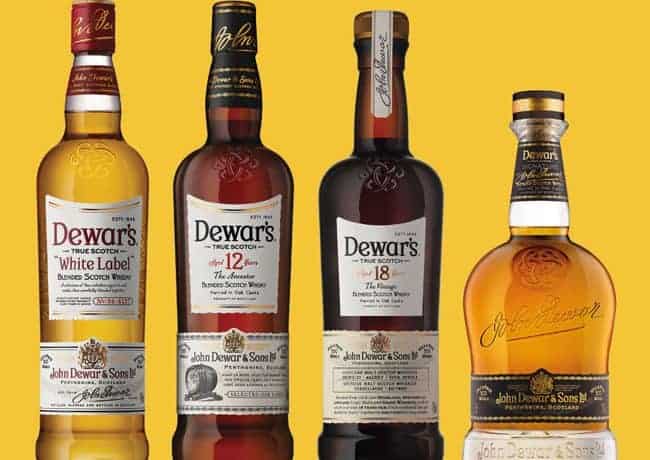 When it comes to scotch sales in the United States, no one does better business than the folks at Dewar’s – and there is no more popular scotch available on the market in the US than the White Label bottle from this company.

Dewar’s was originally founded all the way back in 1846, obviously in Scotland, and grew to become one of the most popular producers – not only in Scotland, but internationally – of this spirit by the time 1899 rolled around.

By then the company had become a full on family business, and both sons of the founder of Dewar’s dove headfirst into expanding the business and creating a real scotch empire. This company was one of the first to ever sell scotch (blended scotch) in glass bottles, were one of the first pioneers in the world of double aging and aging blends of scotch, and help to export this spirit all over the world and create real demand for one of the most truly Scottish traditions embraced worldwide.

Recognizing that scotch could be a little “harsh” for those first experimenting with this spirit, the folks at Dewar’s decided to come up with a formula that would help ease people into their more robust options.

Dewar’s White Label was created to help people get introduced into the world of scotch and it does a fantastic job of exactly that today – at a price point that is almost impossible to beat.

Comprised of more than forty plus different malt and grain scotch whiskeys produced by the Dewar’s organization at numerous distilleries throughout the Scottish Highlands, each and every one of these whiskeys are combined together by AJ Cameron, the First Master Blender at Dewar’s.

Both single malt as well as single grain whiskeys are combined together to create the unique flavor profile of White Label, and after these blends have been successfully combined they are tucked away into oak barrels to be aged for at least three years (though sometimes the aging process can stretch to four years and even just a little bit longer for this kind of scotch).

The oak casks used are usually casks that had been used for aging bourbon or sherry in the past, and will have been selected specifically to add even more to the flavor profile and nose of Dewar’s White Label.

Dewar’s White Label is upfront with a very pleasant sweetness as well as a bit of cereal, honey, and apples. There’s a little bit of a floral quality to this blended scotch as well, though obviously the majority of the flavor profile is going to be built on the back of the traditional scotch whiskey profile.

A little bit of the caramel flavor that makes some of the other Dewar’s scotch options (the 12 and 18 years scotch options in particular) as popular as they are can be discovered in this spirit, though you’re going to have to do a little bit of searching in a way that you don’t have to with those more expensive options.

The smoky peat flavor is definitely on full display here, almost overwhelming everything else initially but then slowly receding to allow the rest of the flavors plenty of room to breathe and to wash over your taste buds.

This is why people drink scotch in the first place, however – to enjoy that smoky heat – and if you want more of that in your glass then White Label is definitely going to deliver.

The smell and aroma of Dewar’s White Label is a little bit more on the smoky side of things, but there is some underlying complexity with a bit of lemon, bit of tangerine, and even a little bit of vanilla if you’re willing to really breathe deeply.

The mouth feel of this scotch can be considered somewhat watery compared to other options from Dewar’s. This usually surprises people at first blush, considering just how much smokiness this scotch has upfront.

The overall experience of this scotch however is rather relaxing, with a fairly smooth start, middle, and finish with only a little bit of a bite on the backend. Plenty of people choose to drink Dewar’s White Label straight out of the glass with maybe a drop or two of water or a tiny bit of ice, but many more choose to mix it into scotch based cocktails because of its forward smoky presence and the extra heat that it has on the back end.

At the end of the day, this is easily one of the best inexpensive scotch options you’ll find on the market today.

The affordability of this scotch is second to none. It easily tastes as good as scotch options that can cost two, three, or even four times as much as this scotch will.

There’s a reason why it’s the most popular scotch in the US (and plenty of other locales around the world), and why so many of bottles of White Label are sold each and every single year.