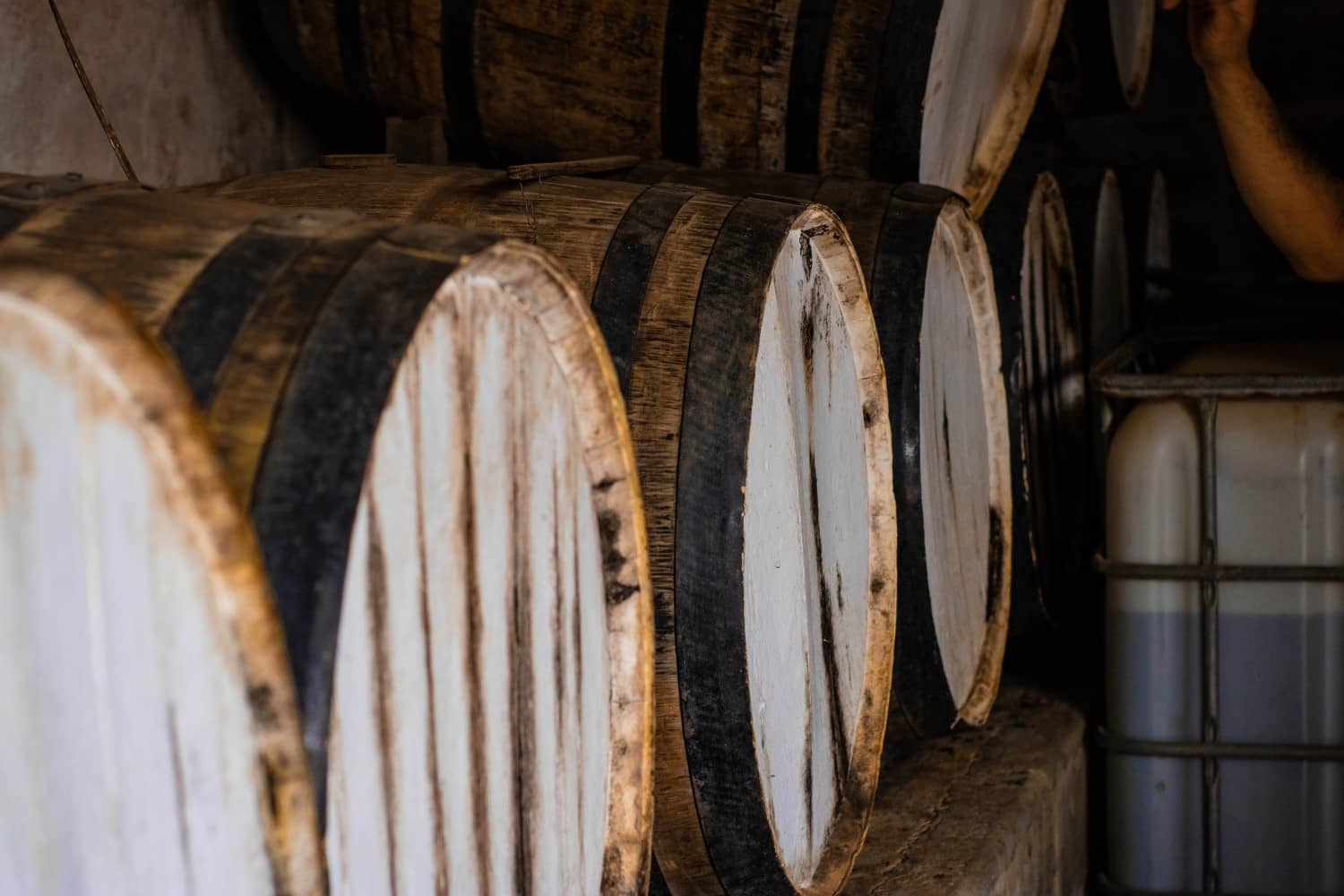 When you sip on a fine Scotch Whisky, do you ever ruminate over how many bottles there are in one barrel? It’s something many people take for granted and only those experienced with distilling are aware of such things.

So, how many bottles are in a barrel of whiskey? In general, there are around 53 gallons of whiskey per barrel. The average bottle size is 750 milliliters. Therefore, there’s about 267½ bottles per barrel of whiskey. That said, the answer is not as simple as all that.

Because different barrels, also known as casks, come in varying sizes, types and shapes, this will affect how many bottles can come from it. Plus, there are other factors, like the Angel’s Share and the bottling process, that affect the number of bottles that can come from a single barrel. 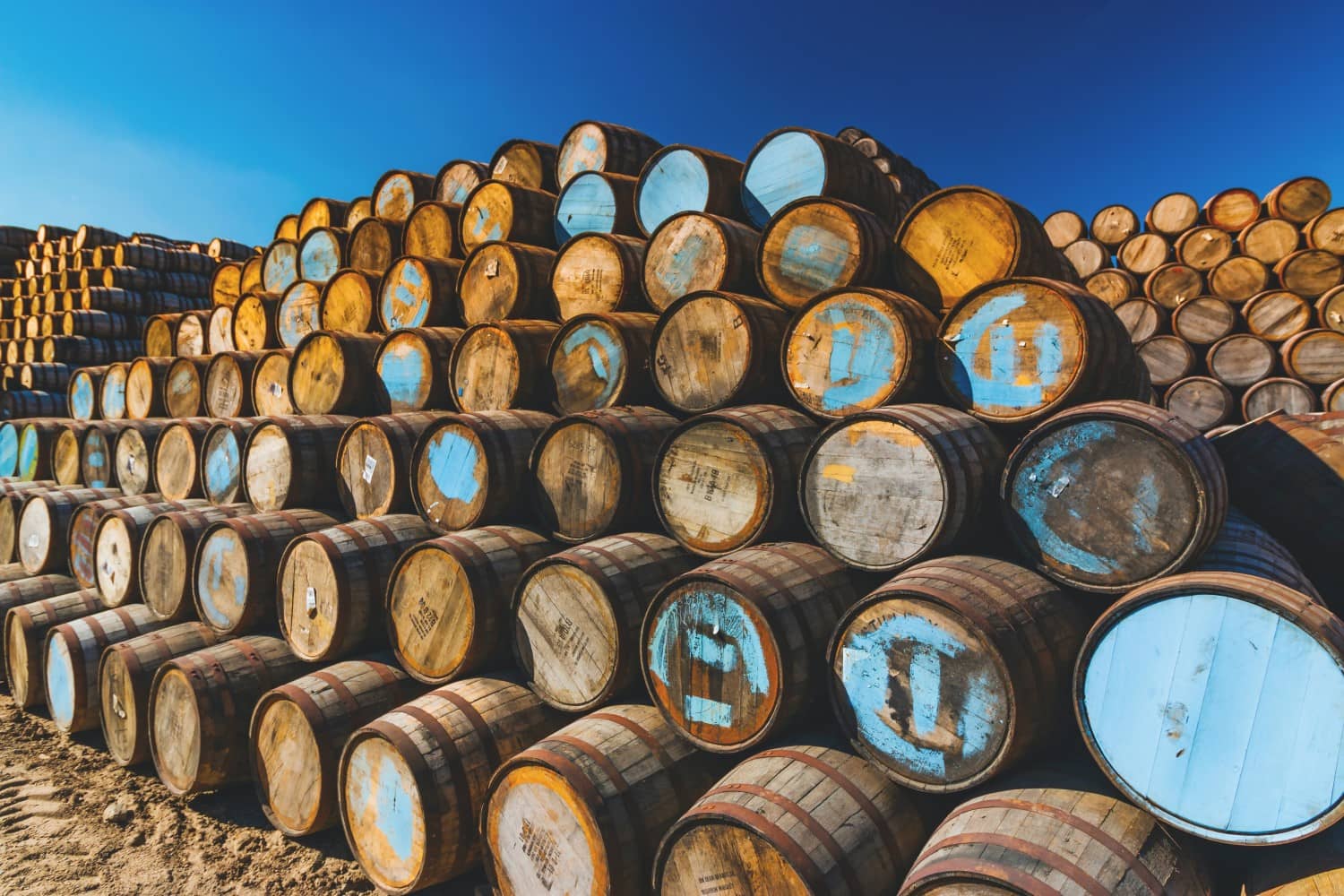 How Many Bottles are in a Barrel of Whiskey?

Understanding basic volume measurements and a little math will come into play here. While you don’t have to be a wiz, there are some simple conversions to keep in mind.

When discussing how many bottles are in a barrel of Whiskey, many people either refer to gallons or liters. These are then measured to fill bottles in fluid ounces (fl oz), liters (L), milliliters (mL) or centiliters (cL). The conversion of these goes as follows:

US, Europe or Canada

But, these measurements depend on where you are in the world. The US uses different indicators than they do in Europe or even Canada. In the US you’ll find bottles measured in milliliters or liters while centiliters and liters are common in Europe. However, Canada will often go with fluid ounces.

For instance, in the US a 1.75 liter bottle – also called a “handle” – is a 60 or 60-pounder in Canada. This is essentially 60 US fl oz. However, for the sake of simplicity, all the estimates will focus on an average 750mL or 75cL bottle. Both of these are essentially the same thing and will equate to ¾ liter.

The obvious factor that will affect how many bottles are in a barrel of whiskey will be the type of cask used to age and/or finish a batch. Most of casks comprise oak. The most frequently used types are a standard American barrel or a hogshead.

But then there are some casks used exclusively for finishing rather than maturing whiskey. These include quarters, barriques, butts, Madeira drums, puncheons and port pipes. There are others as well, but the list below indicates the most popular types used along with the size and the number of bottles that can come from it.

Quarter casks are the smallest size used for aging and finishing Whiskey. The idea behind coopers using these is that it provides for a faster maturation process. This means there’s a lot more wood touching the whiskey as it sits, ergo faster maturation and aging.

The American standard barrel is what most people simply refer to as a “barrel.” These are the most common type of cask used to age Bourbon. After use in Bourbon, coopers reuse these in Scotland to mature Scotch Whisky. This is because of the vanilla and caramel flavors created by the Bourbon.

Regarding how many bottles are in a barrel of whiskey, american standard barrels hold 50 to 53 gallons or 190 to 200 liters. Therefore, one standard barrel can produce about 253 to 266 75cL bottles of Whiskey.

Get to know every step of Bourbon Production! 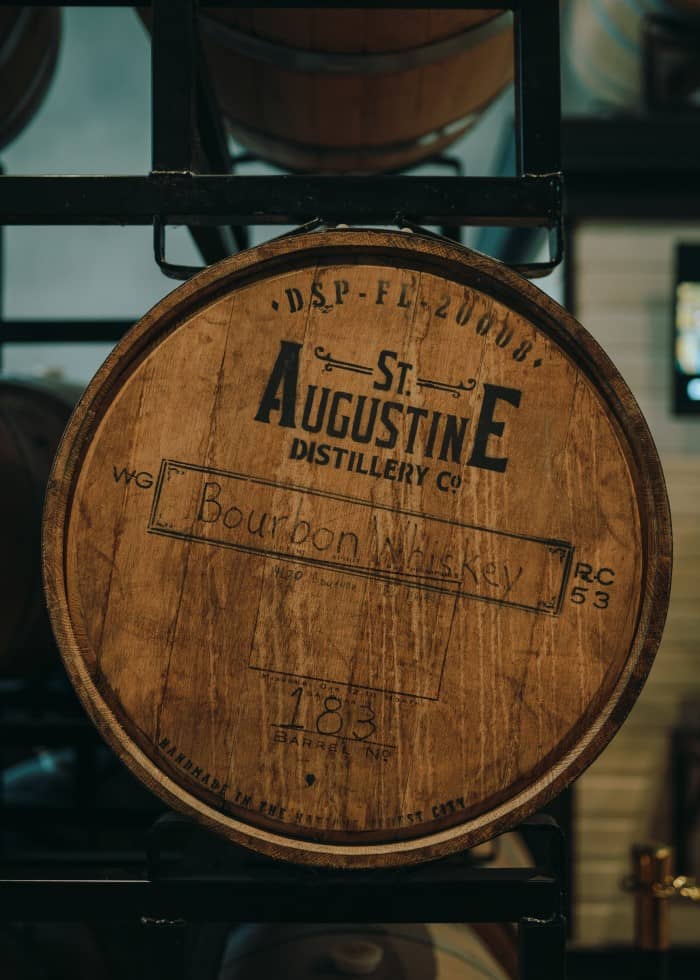 Hogshead casks are larger than standard barrels and often made with additional staves upon rebuilding used standard barrels from Bourbon. No one really knows where the term “hogshead” comes from in regards to a cask. However, it may be an old Germanic or Norse word referring to a measurement used in ancient times.

Another type of cask reused for aging or finishing Whiskey are barrique casks. These come from the wine-making industry and are often from French oak. These huge cylinders are so bulged in the center that they are actually wider than they are long.

Sherry and Rum are the most common spirits first aged in puncheon casks. Later, they go to Scotch Whisky producers and provide an interesting taste to the final Whisky product. A puncheon also refers to an old English way of referring to a specific measurement. 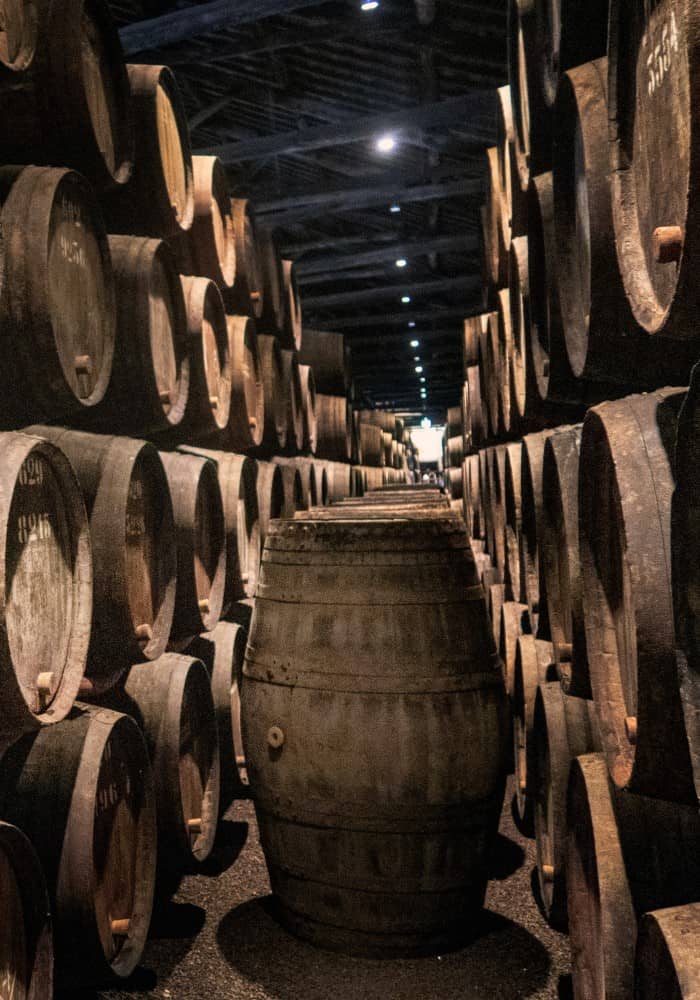 Today, these are the type of cask used in sherry production. These have the capacity to hold around 125 to 132 gallons, or 475 to 500 liters, of Scotch Whisky. These have a potential yield output of about 633 to 666 75cL bottles.

The port pipe cask is one of the largest types of barrels and most often made in Europe. These are usually for finishing rather than aging Whiskey.

As the largest of all casks available and made from thick staves of European oak, the Madeira drum is king. These finish Scotch Whisky and hold about 158 to 171 gallons, or 600 to 650 liters, which translates to 800 to 866 75cL bottles.

There are many factors that affect how many bottles can fill from one whiskey barrel. The Angel’s Share and the bottling process itself can affect the amount as well as the total years of aging.

When whiskey sits during its maturation process, a small percentage evaporates. This lowers the amount of Whiskey in the barrel, about 2% every year of aging. Otherwise known as the “Angel’s Share,” the spirit evaporates due to the porous nature of the barrel.

The legend is that this is the portion of a spirit that goes up into the heavens. It’s also this bit of loss in the overall volume of a barrel that helps remove the more undesirable qualities during the aging process.

The Angel’s Share impinges on the age of the barrels themselves and the climate where the cask matures.
Therefore, when accounting for the “Angel’s Share,” one barrel of 53 gallons of Whiskey turns into 150 to 200 750ml bottles. So, for the numbers listed above with each of the casks, you can safely lower the estimated number of how many bottles are in a barrel of whiskey. 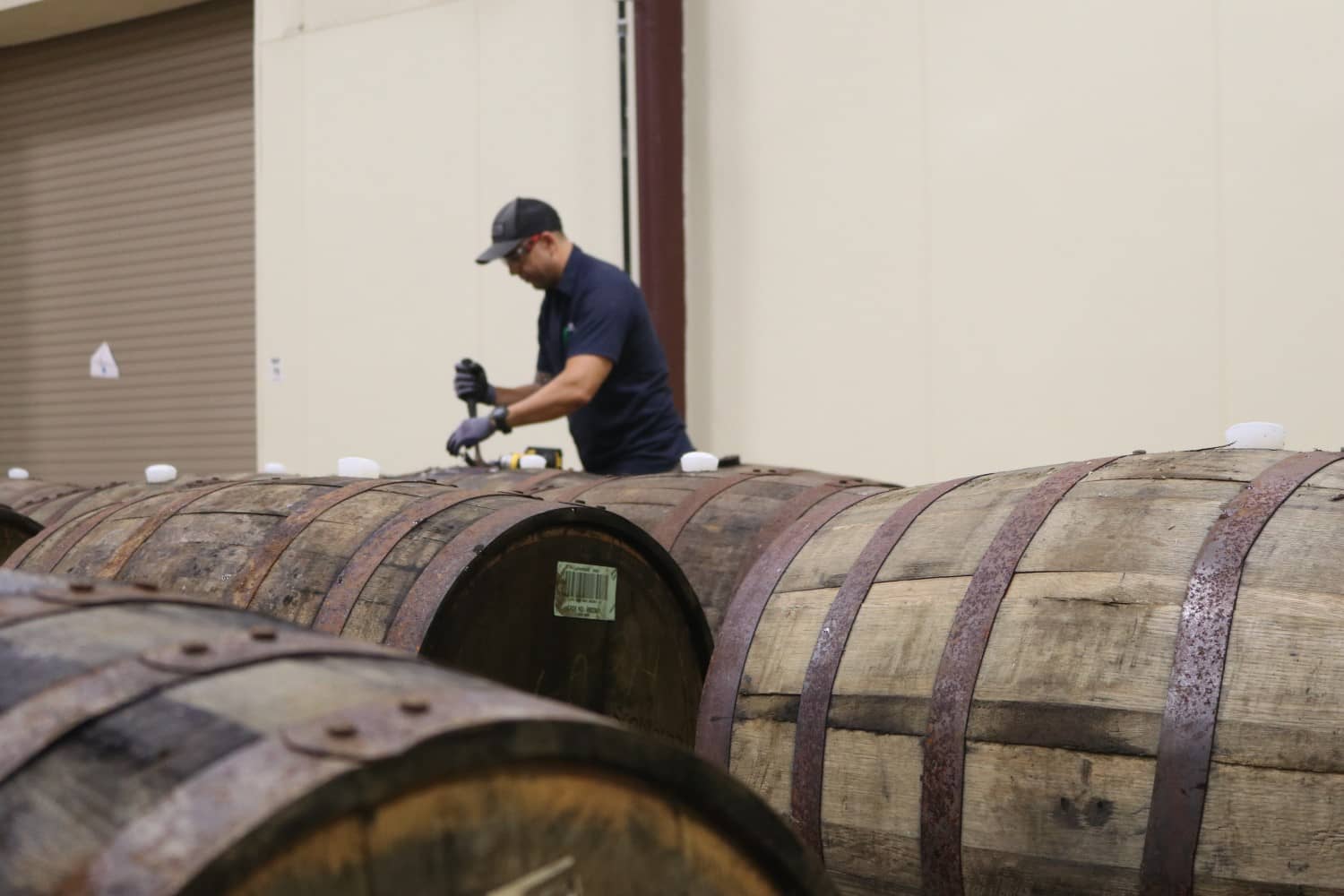 Some distillers will dilute their casks during the aging process to make up for the loss that occurs. The legal limit is 40% and is a normal part of the distilling process. But, even this evaporates the longer a barrel ages over time.

So, some barrels will age at a minimum of two to three years or as much as 75 to 80 years. When you include the Angel’s Share, it’s about a 4% to 6% loss for a basic minimum maturation period. But, for longer aging processes, it could be as much as 160%. So, adding more water will be essential the longer a barrel sits and to determine how many bottles are in a barrel of whiskey.

Once the maturation process has ended, the next steps are to filter and bottle the product. Both of these can contribute to further remove total liquid from the cask. This can range anywhere between 1% and 5%. The filtration and subsequent pouring into the bottles are the culprits because of the Whiskey’s exposure to oxygen.

Also, it’s not uncommon for some Whiskey to spill or for bottles to break during this process. Naturally, this further lowers the yield output.

While the American standard barrel is the typical type used in most Whiskey distilling, you can assume with a modicum of certainty that you’ll get about 253 to 266 75cL or 750mL bottles. But, this is going to depend on the producer and if they use a finishing process in another barrel, such as a Madeira drum.

These all combine to reduce the possible number of bottles that can come from one batch of whiskey.

Combine that with the Angel’s Share, filtration and bottling and it comes to about 10% less than what started it off. But, once again, it will depend on how long the barrel ages for.

So, answering the question “How Many Bottles are in a Barrel of Whiskey” is quite more complicated than it was expected, since we have to count with all these factors.